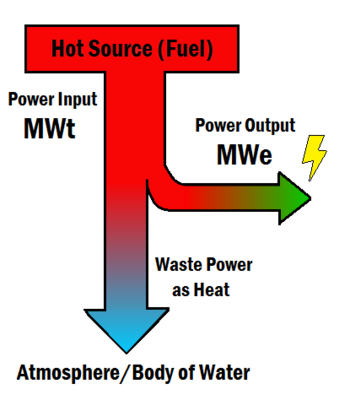 For example, a coal-fired power plant rated at 1000 MWe and 3000 MWt will require supply of 3000 MW of heat from burning coal for every 1000 MW of electricity it produces. That's approximately 100 kg of coal every second. This means that it puts out 2000 MW of waste heat, usually into a large body of water or the atmosphere. 1000 MWe for every 3000 MWt leads to an efficiency of 33%, which is fairly standard for older plants.

It is good to understand the difference between the two numbers, because, in the event of a proposed project, you can understand how efficient a plant will be. The closer a power plant's MWt and MWe ratings are, the more efficient it is.

It is worth noting that not all power plants are heat engines, specifically hydroelectricity, photovoltaic electricity and wind power are not heat engines so they have no megawatt thermal rating. These primary energy flows have other types of losses associated with them though. Likewise fuel cells aren't heat engines, but are not able to convert energy without losses.