Fuel cells are a type of energy conversion technology which take the chemical energy contained within a fuel and transform it into electricity along with certain by-products (depending on the fuel used). [1] It's important to note that fuel cells are not heat engines, so they can have incredibly high efficiencies. However, when a heat engine is used to power a fuel cell, the heat engine still has a limiting thermal efficiency.

Fuel cells can be seen as an energy storage device, as energy can be input to create hydrogen and oxygen, which can remain in the cell until its use is needed at a later time. In this sense they work much like a battery. There are multiple types of fuel cells, but two common types are the solid oxide fuel cell (SOFC) and the polymer electrolyte membrane fuel cell (PEMFC).

To produce electricity in a solid oxide fuel cell, oxygen in the air combines with free electrons to form oxide ions. The oxide ions travel through a ceramic electrolyte and react with molecular hydrogen to form water. The reaction that makes water also releases electrons which travel through an external electrical circuit, producing electricity.[4] This process can be seen in figure 1.

To produce electricity in a polymer electrolyte membrane fuel cell, a gaseous fuel is input and reacts with a catalyst made of platinum nanoparticles. When molecular hydrogen comes into contact with this, it splits into two H+ ions and two electrons. The electrons are conducted through an electromotive force and electricity is produced. The hydrogen ions pass through a proton exchange membrane (also known as a polymer electrolyte) where it reaches the cathode and combines with oxygen to form water. This process can continue as long as there is hydrogen and oxygen supplied to the cell.[1] Figure 2 shows this process in a PEMFC.

The video below from NASA illustrates how oxygen and hydrogen come together in a solid oxide fuel cell (SOFC) to release energy which can be snagged in a useful way.

An attractive fuel for use in fuel cells is hydrogen, which is actively being researched and developed. The reasons for hydrogen use is not only because of its high energy density (121 MJ/kg),[5] but because the only by-product aside from electricity is water.

Although hydrogen is the most abundant element in the universe, it doesn't exist in its elemental form on Earth. Therefore hydrogen must be manufactured by inputting energy into hydrogen compounds like hydrocarbons or water. Depending on how this is done, the process may also release pollutants. Around 96% of hydrogen produced is done by using natural gas and other fossil fuels, resulting in considerable CO2 emissions. However, for the future, cleaner methods of attaining hydrogen (ie. water) are preferred.[1][6]

Use of fuel cells 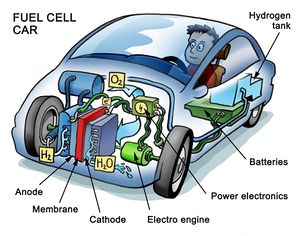 Many countries are spending enormous amounts of money into the development of hydrogen fuel cells. Burning oil products (or any other fossil fuels) produces pollution; most specifically, burning releases carbon dioxide which contributes to global warming and ultimately changing climate.[1]

The most promising use for hydrogen as fuel (for the immediate future at least) are in vehicles—and there are already hydrogen based vehicles on the road today. The theoretical maximum efficiency of hydrogen fuel cells is 83%, with realistic efficiencies around 60%.[9] Combined with an electric motor of 90% efficiency, the vehicles can achieve an efficiency of 54% before factoring in other energy losses. This is around 2 - 2.5 times higher than a typical gasoline-powered vehicle.

There is plenty of criticism for these types of vehicles, as many claim the cost of these vehicles will never be practical. The platinum in the fuel cells has made them expensive, but advances are bringing the price down.[1] The durability and performance of such systems, along with the infrastructure necessary to accommodate them, is also under scrutiny.