Microgeneration is a term typically used to describe a type of generator that harnesses energy from renewable sources to power a home, business or other local electricity user. Depending on a user's location and government laws in that area, different sized systems may or may not fall under the classification of a microgenerator. Microgenerators are either "grid-connected" or "off-grid". "Off-grid" microgenerators use batteries to compensate for the difference between the electrical load and the generated electricity. "Grid-connected" microgenerators have no or other storage devices and uses the electrical grid to accommodate that difference. 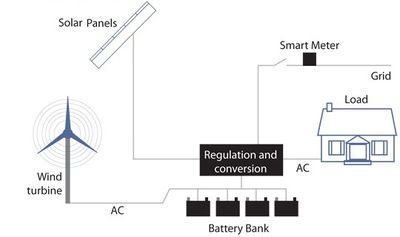 Exemplary configuration of a microgeneration system that includes a micro-wind turbine, a PV system, and an energy storage unit.[1].

The different microgeneration systems that are typically used include solar arrays, micro-wind turbines, combined heat and power systems, and micro-scale hydroplants. Electricity generated from these systems is typically direct current (DC) and has to be converted to an alternating current (AC) prior to usage within a home or exported to the electrical grid. This is accomplished by using a device called an inverter.

A grid-connected microgenerator means that in addition to being connected to a load such as a house, it is connected to the electrical grid and a bi-directional or "smart" electricity meter. This allows a system's owner to export excess electricity back to the grid and receive financial compensation. Being grid-connected also provides the assurance that regardless of the weather conditions, a home always has access to electricity. If the microgeneration system is not producing energy because of the lack of sun or wind, it will draw electricity from the grid to meet the owner’s demand. It should be noted, however, that in the case of grid failure such as a blackout, grid-connected microgenerators will automatically shut down as a safety feature to prevent energizing electrical lines thought to be down and safe to operate on. Grid-connected microgeneration systems with battery backup are able to continue operating through grid failure but typically only to operate critical or emergency loads such as sump pumps, freezers and furnace fans.

A microgenerator that is not connected to the grid will typically be connected to an energy storage device such as a battery. Instead of exporting excess electricity onto the grid, the electricity is stored within a battery for future use when no resources are available for electricity generation (solar or wind). A disadvantage of this approach is that during peak production hours, a battery may become fully charged and excess electricity would be wasted as it cannot be stored. Battery storage capacity is also an issue, as the battery is limited to storing enough electricity for a finite period of time. During winter months where solar and wind potential may be lacking, the system may not be sufficient to meet electrical demands leading to the need for a backup gasoline or diesel generator.

Microgeneration offers a unique opportunity for homeowners not only to generate green energy but also to subsidize their direct energy costs. By using solar, wind, and cogeneration systems in their homes, consumers can reduce their home's energy consumption as well as subsidize their electrical utility costs.

The cost of electricity

Microgeneration systems typically have long payback periods which is viewed as a disadvantage by many consumers. Although the prices continue to fall with the advances in microgeneration technologies and increased demand, the high initial capital costs can be unappealing for many home or business owners. However, financing options and government subsidies can help reduce this barrier. Although it may take several years for microgeneration systems to pay for themselves, many systems come with warranties of 10-25 years.

Microgeneration is regarded as an environmentally friendly technology when generating electricity due to its minimal life cycle emissions.[2] For example, solar photovoltaics and wind turbines do not emit carbon dioxide or other gases when operating as they use energy from the sun and wind to generate electricity. As such, minimal or no emissions are produced during the operation of microgenerators. Emissions do occur during the manufacturing, shipping and recycling/disposal of these technologies, however, resulting in life cycle greenhouse gas emissions of 8-20 g CO2/kWh for wind, and 30-80 g CO2/kWh for solar. For comparison, the values for natural gas and coal fired generation are 500 g CO2/kWh and 1000 g CO2/kWh, respectively.[3]