The Organization of Petroleum Exporting Countries or OPEC an organization that was created at a conference in Baghdad, Iraq on September 10th-14th, 1960. The founding members which include Iran, Iraq, Kuwait, Saudi Arabia and Venezuela agreed to create an organization that could bring some degree of stability to the world oil market. OPEC agreed to coordinate energy policies to ensure a fair price for their exported oil and a steady supply to the market.[2]

In the 1950s, the Soviet Union had massively increased its output of crude oil to the market and as a result, members of The Seven Sisters had to drop their price to compete with the Soviet oil in several markets. The Seven Sisters were the largest oil companies of the time: Esso, Mobil, Standard, Gulf, Texaco, BP and CFP.[3] After a second consecutive cut in the oil price the Arab countries got together and decided to find some way to ensure the price would not fall further and that they could make their oil more profitable for their respective nations. [4] 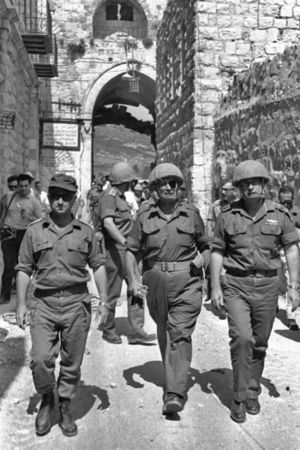 In the 1960s OPEC established its place in the world oil market. Immediately OPEC had trouble cooperating and coordinating strategy, at the 1962 meeting of the members, a battle broke out over export limits. Each country wanted to export as much oil as they could but flooding the market with cheap oil would decrease the price of oil. Since keeping the price of oil at certain level was the goal of OPEC, a drop in the price was not welcome.[6]

The new organization was fragile and suffered from the fact that it straddled the divide between the economic and political realm. During the Six-Day War in 1967 when Israel launched a preemptive military action against its Arab neighbors Syria, Egypt, Jordan, Lebanon and Iraq Many of the Arab members of OPEC wanted to boycott Israel. The war only lasted six days (hence the name) so any boycott would have had little to no effect. The embargo failed because two members, Venezuela and Iran, did not support the sanctioning of Israel.[7]

In 1968 OPEC released the Declaratory Statement of Petroleum Policy in Member Countries which sought to enshrine the right of every nation to have complete sovereignty over their natural resources for the purposes of national enrichment and development. This was an important statement to make as the decolonization movement was in full swing and many of the OPEC nations were former colonies anxious to push back against the dominance of the powerful petroleum companies in the market. These companies were powerful multinationals mostly owned by wealthy countries. Over this time the membership of OPEC expanded and by 1969 five additional member nations had joined OPEC:

By the end on the 1960s OPEC was having trouble keeping their share of the market. New sources of oil were being discovered and developed, Nigeria, Alaska and The North Sea were all major deposits that posed problems to OPECs goal of controlling the market and keeping prices at a certain level.[8]

Figure 1. A sign at an Oregon gas station indicating the availability of gasoline to its customers in 1973. The Shortage from the embargo meant that gasoline had to be rationed, quantities per purchase limited and at times there was simply no gasoline available.[9]

In October of 1973 Egypt and Syria (supported by a number of Arab nations) launched an attack against Israel which came to be known as the Yom-Kippur War. At the time the U.S had rising consumption, falling production and increasing imports of oil, mostly from OPEC countries. The decision by the U.S. to intervene in the Yom-Kippur War on the side of Israel had a disastrous effect for the US economy. Early in the war, the U.S decided to supply Israel with arms, this angered the Arab delegation of OPEC which responded with an embargo of oil sales to the U.S, Canada, the UK, Japan and the Netherlands.[11] The embargo shocked the oil market and creates a shortage in supply. The embargo nations were able to get oil companies to sell them oil from other countries however the mass confusion resulting from the normal supply translated into a sharp rise in prices. Oil traders and companies having to shift supply lines and resources lead to large transport and transaction costs which played into the already high price resulting from the shortage.

The embargo was a shift in global political and economic power as now the OPEC countries (largely entered in the Middle-East) could influence powerful nations such as the UK and U.S by manipulating oil supplies.

It is important to note that OPEC did and does not have a monopoly over the oil market, in 1973 they only had 56% of the oil market and while this led to a large amount of influence it does not allow OPEC to totally control the market. OPEC is an international cartel. The governments of the OPEC countries agreed to coordinate with petroleum firms (both state owned and private) in order to manipulate the worldwide oil supply and therefore the price of oil. OPEC has always had trouble cooperating, the 12 countries are not always able to coordinate policies to ensure their control over the market due to a large number of political and economic factors.[12] Because OPEC does not control the whole market they are restricted by what the rest of the market does. In the instance of the 1973 embargo the embargoes nations were able to reconfigure their supply lines to keep the oil flowing despite a short-term drop in supply and rise in prices. The ability to find other sources limited the effects of the embargo to the short term.

Additionally, the OPEC nations had inadequate or underdeveloped downstream activities so they are reliant on mostly western companies to get their product refined and to market.[13]

At the beginning of the decade there was a fear that crude oil was becoming scarce and that the price would rise exorbitantly in a short time, this drove advances to search for energy alternatives as a way to avoid high prices and dependence on OPEC.[14] Countries reliant on OPEC oil sought to mitigate the effects of rising prices and dependence by replacing oil with other fuel sources such as coal, nuclear power and natural gas. The switch to coal for electrical generation was a simple change, in addition more research was done and emphasis was placed on the use of nuclear power to encourage the switch from oil.[15]

The Iranian Revolution (1979) and the subsequent Iran-Iraq War (1980-1988) restricted the supply of oil from Iran, their production had collapsed. Production increases form other OPEC members plugged the hole left by Iranian production. By July, 1980 the oil marker price was $30, more than double the $12.70 market price in December 1978. By the 1990s the price of OPEC oil had increased almost 40% since 1980.[16]

Continued exploration in the Gulf of Mexico, the North Sea, Alaska, Siberia and other places ate away at OPECs grip on the market. In addition, many countries began to burn more coal as a way of avoiding expensive oil. Technological advances in the North Sea led to overall increases in production and by 1973, the USSR had become the top oil producer worldwide, further eating into OPECs share of the market.[17]

In response to rising oil supply, OPEC sought to force a rise in prices by placing a quota on its members. By restricting the level of output, OPEC hoped that the lower supply would cause the price to rise. The quota was a maximum of 17.5 million barrels per day.[18] As was the nature of OPEC, the various countries couldn't agree and both Saudi Arabia and Iran increased production in an attempt to capitalize on the void left by lower production levels.[19]

Prices did rise, to a high in the first half of the decade but this was followed by a crash in 1986, oversupply to the market and an attempt to shift away from hydrocarbons caused the price of oil to drop.[20] The subsequent rally of the oil price helped revive oil revenues to the OPEC countries but prices did not recover to the highs seen before the 1986 glut.[2]

The end of the Iran-Iraq War in 1988 bought only a short period of political stability to OPEC. In 1989 the USSR collapsed and dissociated into a number of republics leading to a disruption in formally dominant Soviet oil production dominancy. 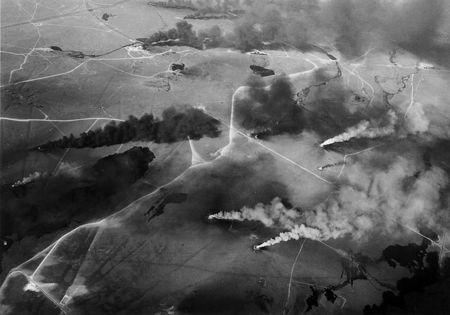 Before long, Iraq invaded another one of its neighbors, Kuwait (in 1990), also a member nation of OPEC. Leading up to the invasion, Iraq advocated for OPEC to revise the quotas that it had imposed, After the eclipse of the Iran-Iraq War, Iraq was struggling to rebuild and wanted to export more oil to increase revenues.[22]

Ecuador and Gabon both suspended their membership in OPEC for periods of time, 1992-2007 and 1995-2016 respectively, seeking a release from the terms of the cartel. Both sought to increase their production levels.[23]

Following the invasion of Kuwait, the 2003 invasion of Iraq by the American-led coalition created a short term drop in supply, but the other members, especially Saudi Arabia were able to fill the gap as Saudi oil production had grown in depth and breadth since the 1970s. The insurgency that tied up coalition forces in Iraq kept Iraqi oil production low while oil prices rose significantly.[2]

Conflicts in OPEC countries such as the conflict in Libya (2011-present), Attacks on Nigerian oil infrastructure (present), the ongoing conflict in Iraq and Syria etc. caused periodic disruptions in supply and continue to do so.

OPEC Members (and the date they joined OPEC)