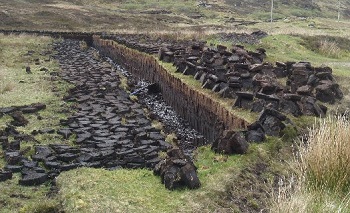 Peat is a soft, crumbly, dark brown substance that is formed from generations of dead and partially decaying organic matter. To form peat, the vegetation must fall and be buried in a relatively oxygen poor environment so that it can be incorporated into layers of the soil without completely decomposing.[2] Peat contains energy that the plants it contains created using photosynthesis. Although the peat used today is older, the material is still being formed today in bogs around the world.[3]

Peat is the first step in the formation of coal, and slowly becomes lignite after pressure and temperature increase as sediment is piled on top of the partially decaying organic matter. In order to be turned into coal, the peat must be buried from 4-10 km deep by sediment.[2] Since peat becomes coal over time, it is classified as a fossil product.[3]

Although peat is not used widely to generate electricity as it has a low carbon content, less than 60%,[4] it is still used for domestic heating in some places around the world.[3] It is cut out of peat bogs in slabs, dried out, and used to warm houses and cook. Compared to coal products, peat has a much lower energy density of only 15 MJ/kg.[4] Below is an interactive pie chart that shows how much peat Ireland uses. Even though Ireland is one of the countries that uses peat the most, you can see that it still makes up a very small amount of their primary energy use, especially in more recent years where alternatives are being used more widely. Look at different years to see how this use has changed.