In other languages: Español

Both the terms occurrence and reserve refer to some amount of a resource, however, the ideas are fundamentally different. Primary fuels such as coal, oil, natural gas, and uranium are materials that occur on the Earth, and have associated occurrences (all that exists) and reserves (the amount that can be economically extracted). Flows in nature like wind, solar and hydro only have associated occurrences, and no reserves as there is no "stockpile". Usually, the term reserve refers to fossil fuel reserves - the amount of a particular fossil fuel that we know about that can be extracted from nature with current technology at current prices.

On the other hand, reserves are deposits of fossil fuels that are known to exist with a reasonable level of certainty based on geological and engineering studies. These reserves are also recoverable economically with the technologies that currently exist.[1] This means that the amount of fossil fuel in a reserve will always be less than the total occurrence of the fossil fuel. Essentially, reserves represent the current amount of fuel that can be extracted in the near future.

The difference between an occurrence and a reserve can be explored using a McKelvey diagram. A simple adaption of the McKelvey box is seen in Figure 1, and it portrays information about how a resource can be classified. The entire box represents the resource's occurrence and within it are various categories. Moving from left to right means the certainty of existence for an occurrence decreases. Moving from the top to bottom represents the decrease in economic feasibility (usually when prices for a a fuel goes down). The bottom left corner (conditional resources) represents resources that aren't economically feasible to extract, but are known to exist to a fairly high certainty. The right side (hypothetical/undiscovered resources) represent ones that aren't known to exist (and therefore can't be economically feasible)! Lastly, the top, left corner represents the reserve. A true Mckelvey box will go more in depth on the varying certainties of a reserve (known as the 3 P's of reserves), which can be explored on its main page, here. 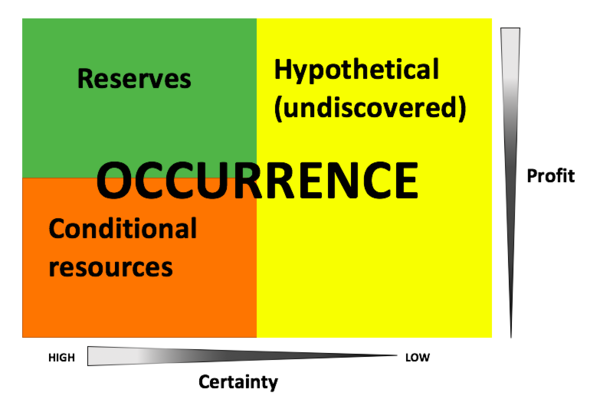 Figure 1. All reserves are part of the total occurrence, not all occurrences of resources are known reserves that can be mined—or economically feasible. [2]

Since occurrences include undiscovered fuel deposits, there is a varying level of uncertainty on the quantity of a resource's occurrence, while the size of reserves can be estimated to a fairly certain degree.[1] This does not mean that there is no way to estimate the size of these occurrences. The total amount of a resource can be described and estimated based on information obtained from surveys.[3]

It's important to recognize that when reserves go up (see the reserve page) that's because of improved technology, higher prices (better for the economy) or newly found deposits.