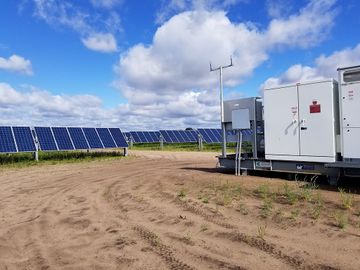 Figure 1. A photovoltaic system comprised of a solar panel array, inverter and other electrical hardware.[1]

A photovoltaic (PV) system is composed of one or more solar panels combined with an inverter and other electrical and mechanical hardware that use energy from the Sun to generate electricity. PV systems can vary greatly in size from small rooftop or portable systems to massive utility-scale generation plants. Although PV systems can operate by themselves as off-grid PV systems, this article focuses on systems connected to the utility grid, or grid-tied PV systems.

How do these Systems Work?

The light from the Sun, made up of packets of energy called photons, falls onto a solar panel and creates an electric current through a process called the photovoltaic effect. Each panel produces a relatively small amount of energy, but can be linked together with other panels to produce higher amounts of energy as a solar array. The electricity produced from a solar panel (or array) is in the form of direct current (DC). Although many electronic devices use DC electricity, including your phone or laptop, they are designed to operate using the electrical utility grid which provides (and requires) alternating current (AC). Therefore, in order for the solar electricity to be useful it must first be converted from DC to AC using an inverter. This AC electricity from the inverter can then be used to power electronics locally, or be sent on to the electrical grid for use elsewhere.

In addition to the solar panels, there are other important components of a photovoltaic system which are commonly referred to as the "balance of system" or BOS.[3] These components (which typically account for over half of the system cost and most the of maintenance) can include inverters, racking, wiring, combiners, disconnects, circuit breakers and electric meters.

Figure 3. A solar panel, consisting of many photovoltaic cells.[4]

A solar panel consists of many solar cells with semiconductor properties encapsulated within a material to protect it from the environment. These properties enable the cell to capture light, or more specifically, the photons from the sun and convert their energy into useful electricity through a process called the photovoltaic effect. On either side of the semiconductor is a layer of conducting material which "collects" the electricity produced. The illuminated side of the panel also contains an anti-reflection coating to minimize the losses due to reflection. The majority of solar panels produced worldwide are made from crystalline silicon, which has a theoretical efficiency limit of 33% for converting the Sun's energy into electricity. Many other semiconductor materials and solar cell technologies have been developed that operate at higher efficiencies, but these come with a higher cost to manufacture.

An inverter is an electrical device which accepts electrical current in the form of direct current (DC) and converts it to alternating current (AC). For solar energy systems, this means the DC current from the solar array is fed through an inverter which converts it to AC. This conversion is necessary to operate most electric devices or interface with the electrical grid. Inverters are important for almost all solar energy systems and are typically the most expensive component after the solar panels themselves. 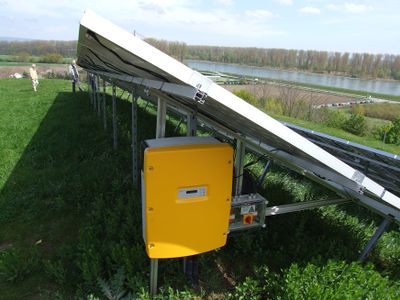 Most inverters have conversion efficiencies of 90% or higher and contain important safety features including ground fault circuit interruption and anti-islanding. These shut down the PV system when there is a loss of grid power.[3]

Racking refers to the mounting apparatus which fixes the solar array to the ground or rooftop. Typically constructed from steel or aluminum, these apparatuses mechanically fix the solar panels in place with a high level of precision. Racking systems should be designed to withstand extreme weather events such as hurricane or tornado level wind speeds and/or high accumulations of snow. Another important feature of racking systems is to electrically bond and ground the solar array to prevent electrocution. Rooftop racking systems typically come in two variations including flat roof systems and pitched roof systems. For flat rooftops it is common for the racking system to include weighted ballast to hold the array to the roof using gravity. On pitched rooftops, the racking system must be mechanically anchored to the roof structure. Ground mounted PV systems, as shown in figure 4, can also use either ballast or mechanical anchors to fix the array to the ground. Some ground mounted racking systems also incorporate tracking systems which use motors and sensors to track the Sun through the sky, increasing the amount of energy generated at a higher equipment and maintenance cost.

The remaining components of a typical solar PV system include combiners, disconnects, breakers, meters and wiring. A solar combiner, as the name suggests, combines two or more electrical cables into one larger one. Combiners typically include fuses for protection and are used on all medium to large and utility-scale solar arrays. Disconnects are electrical gates or switches which allow for manual disconnection of an electrical wire. Typically used on either side of an inverter, namely the "DC disconnect" and "AC disconnect" these devices provide electrical isolation when an inverter needs to be installed or replaced. Circuit breakers or breakers protect electrical systems from over current or surges. Designed to trigger automatically when the current reaches a predetermined amount, breakers can also be operated manually, acting as an additional disconnect. An Electric meter measures the amount of energy that passes through it and is commonly used by electric utility companies to measure and charge customers. For solar PV systems, a special bi-directional electric meter is used to measure both the incoming energy from the utility, and the outgoing energy from the solar PV system. Finally, the wiring or electrical cables transport the electrical energy from and between each component and must be properly sized to carry the current. Wiring exposed to sunlight must have protection against UV exposure, and wires carrying DC current sometimes require metal sheathing for added protection.