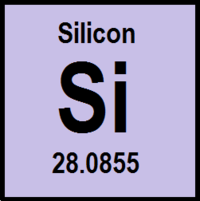 Silicon (Si) is the 14th element on the periodic table.[2] Silicon is the seventh most abundant element in the universe, and it is very common on Earth. In the Earth's crust, silicon is the second most abundant element. The most common compound of silicon is silicon dioxide, or SiO2.[3] This compound is the most abundant compound in the Earth's crust, and it takes the form of ordinary sand, quartz, rock crystal, amethyst, agate, flint, jasper, and opal. Pure silicon is produced by heating silicon dioxide with carbon at temperatures approaching 2200°C.[2] Silicon can get quite pure, and even different isotopes can get quite pure. Special techniques are able to make silicon that is 99.9999% pure Si-28.[4]

Some properties of silicon include:[5]

Silicon is found in nature in the form of silicon dioxide (like some types of sand and many rocks). The extraction of silicon from silicon dioxide is extremely energy intensive; it requires 1000-1500 megajoules of primary energy per kilogram to process high-grade silicon for computer chips or solar panels.[7] This is an excellent example (along with aluminum) of a material that is limited far more by how much energy is needed to make the substance usable (embodied energy) than the abundance on the planet. In other words there will never be a shortage of silicon for any use that people have conceived of; the energy to process it will always be the limiting factor.

Since silicon has so many different forms that it appears in, it is very useful. When in the form of sand or clay, silicon can be used to make brick and other building materials. As a silicate, silicon is used for making enamels and pottery. Silica, another form of silicon, is the main ingredient in glass and can also be used in mechanical devices.[8]

Extremely pure silicon is useful as a semiconductor when doped with boron, gallium, phosphorus, or arsenic. This doped material is then used in diodes, transistors, and rectifiers. As well, this doped semiconducting material is the main component of photovoltaic cells, the cells that solar panels are made out of. The transistors created with this material can be used in microprocessor chips in computers and other advanced technologies.[8]

Additionally, silicon is an important ingredient in steel and silicon carbide is an extremely important abrasive.[8]

The video below is from the University of Nottingham's periodic videos project.[9] They have created a complete suite of short videos on every element on the periodic table of elements.