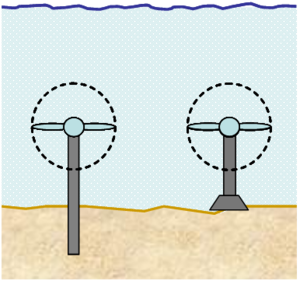 Tidal stream generators use the kinetic energy of moving water to turn a turbine—similar to the way a wind turbine uses wind to create electricity. However, the power available for tidal power generation in a given area can be greater than a wind turbine due to the higher density of water. These types of tidal generators tend to be the cheapest (though still quite expensive) and most environmentally friendly of any type of tidal power generation. There are several different specific types of tidal stream generators which will be discussed below.(maybe a reference in this paragraph?)

These types of generators have a very low visual impact and are mostly or totally submerged. Furthermore, they are less intrusive to marine life because they produce less noise pollution. As discussed on the main tidal power page, tides are more predictable than wind (which varies a great deal). The density of water is also much higher than air, which means that tidal turbines can be much smaller than wind turbines for the same output.[2] This is further enhanced by the use of the Venturi effect, which is a way of getting water to move faster through these turbines.

The initial investment costs for all types of tidal power technology are extremely high and it takes quite a while to make back that investment. In addition, sea water is quite corrosive which leads to high maintenance costs.[2][3]

Since the tides flow-in and recede once per day, tidal stream generators provide intermittent power generation.[3]

(Title is about generators while subsections are about turbines...)

Different designs of tidal power generation may prove to offer different advantages, extensive studies are still needed on this relatively new technology.[6] Studies are needed for maintenance costs vs. income and environmental impacts over an extended period of time. Power output can vary considerably between these classes of turbines. Currently, research data on stream generators and their power output is scarce due to the emerging nature of the industry.

As seen in Figure 2, axial turbines have a rotor that is parallel to the incoming water stream. They use rotors similar to those seen on wind turbines but have modifications due to the differing fluid properties of water from air.[7]

These devices use the lift of water to generate power. This requires specially shaped airfoil surfaces (maybe define what an airfoil surface is?) designed to create a pressure difference. This leads to a net force in the direction perpendicular to the water flow and thus turns the device. Rotors of this type must be carefully oriented (the orientation is referred to as the rotor pitch), to maintain their ability to harness the power of the tide as it changes.[7] 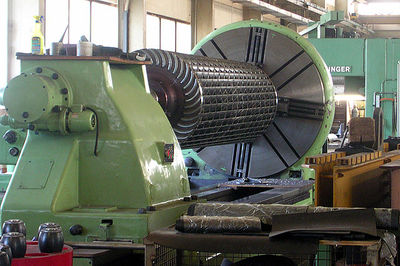 Cross flow turbines (seen in figure 3) have a rotor that is perpendicular to the water flow but parallel to the water surface.[9] Unlike axial turbines, these devices typically use the drag of water to generate power. In drag-based turbines, the force of the water pushes against a surface, like wind on an open sail. This works because the drag of the open face of the turbine blade is greater than the drag on its closed face. Drag based devices are inherently less efficient than their lift-based counterparts because they operate with respect to the relative flow speed of the water. This means that as a turbine rotates faster the relative flow speed of the water will decrease and thus transfer less of its energy.(Could maybe use a sentence on how it is different from vertical axis turbines because the picture doesn't show how it works in the water?)

Figure 4. Conceptual design of a vertical axis turbine. The flowing water moves across the turbine spinning it on an axis that points down, instead of towards the water.[4][5]

As seen in Figure 4, vertical axis turbines have a rotor that is vertical to the water surface and also perpendicular to the incoming water flow. Both lift and drag type blades can be used in these turbines.[10]

Figure 5. An oscillating generator, the flowing water makes the foil move up and down, with the generator housed out of the flow of the tidal water.[4][5]

Oscillating devices do not have a rotational component, instead these generators are pushed back and forth, or up and down by the flowing current to create a hydraulic pump. This pump transfers its energy to a motor, which then turns a generator and creates electricity.[2]

The mechanics on the bottom must, of course, be different for this style of tidal technology.(not sure what "mechanics" is referring to)