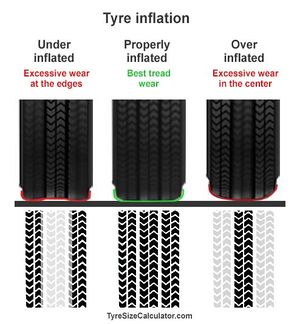 A slightly deflated tire can worsen the fuel economy (make it a large value). It is important for cars to always have properly inflated tires as it also makes a difference in how the tire threads wear.[1]

Improving fuel economy refers to the attempt to achieve a better fuel economy through a variety of means in a vehicle in an attempt to save money and reduce emissions. To learn about technical ways car manufacturers are trying to create cars with a greater ability to use fuel efficiently, please see kinetic energy recovery systems, or regenerative braking.

To be clear, when people talk about conserving energy, it really means using less fuel (usually gasoline). Reducing fuel use in cars saves money as well as reducing environmental impact. The conservation of energy is different, that means that energy can't be created or destroyed, it can only change forms.

Certain factors like a car's brakes and shape affect fuel economy. It is possible to install improved brakes, but the cost-benefit trade off is usually not worth it. However, where and how the driver operates the vehicle also affects the economy. During highway driving, power output correlates to the air drag. This drag is due to the drag coefficient (a constant for a particular shape) multiplied by the velocity cubed. This means that slowing down by 10% uses 27% less power from the engine![2] This does not mean that people should drive everywhere at 30 kph, but at the same time, it does mean that in fifth gear while driving on the highway, considerably better fuel economy can be achieved in most cars by slowing down just a bit (going 120 kph uses 70% more power than going 100 kph).

In a similar vein, limiting rapid acceleration is an excellent way to conserve fuel. In most cases, when the engine is in gear, economy relates to how fast the wheels are turning—faster turning wheels can go farther distances. Modern car engines (approximately year 2000 and up) will not use any fuel at all when the gas pedal isn't being pressed and the vehicle is rolling. This means that when driving down a hill, removing foot pressure from the accelerator will cause the engine not use any fuel at all. However, floor it, and the injectors will insert the maximum amount of fuel.

An exception to this rule is at idling speeds, even if the pedal isn't being pressed the vehicle must burn fuel to keep the engine from stalling while sitting still. Consider turning off a car's engine while waiting at the side of the road to save fuel; however turning the engine off while idling at a stop light could cause a bad car accident.

When at a constant cruising speed in a Mazda Protege, for example, the highest fuel economy (although it should usually be measured miles per gallon) is at around 3000 RPM. This is because the engine converts the fuel to work more efficiently, meaning it requires less fuel to run at 3000 RPM than it does at 1200 RPM. The same holds true for most small cars and can be tested with a manual transmission by driving at a set speed in two different gears. See how far down the pedal needs to be pressed when both accelerating and maintaining speed in the different gears. The closer to the floor the gas pedal is, the more fuel it is injecting into the engine, so it is possible to tell which gear is using more fuel (i.e the one with the least amount of foot pressure). Furthermore, more modern vehicles have gauges that denote exactly how much fuel is being consumed at any given time making it much easier to find the optimal cruising speed or RPM for differing vehicles.

Perhaps it doesn't seem like it matters much, but where a vehicle comes in contact with the road—the wheels— is highly important for fuel economy. The EPA estimates that fuel economy can improve by up to 3.3% by having properly inflated tires, thus decreasing rolling resistance between the tires and the road.[3] This is true for anything with wheels—even peddling a bike with deflated tires is extremely difficult and requires much more energy. The only difference is where that energy comes from—most vehicles harness chemical energy by burning fossil fuels, whereas a person peddling a bike harnesses energy by consuming food. To help quantify the difference in rolling resistance, notice how much slower a mountain bike rolls down a hill compared to a road bike. 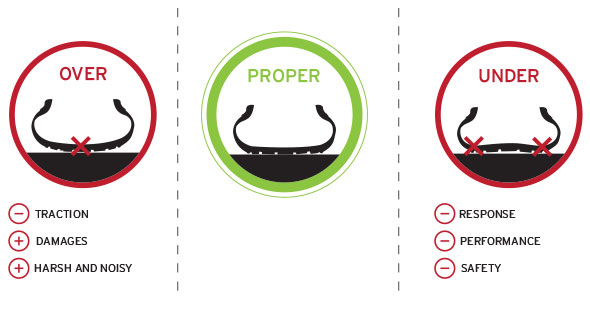