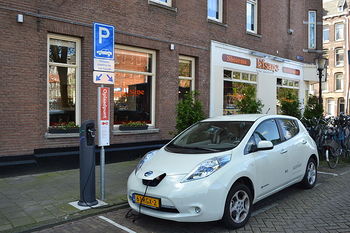 Electric vehicles (EV) are vehicles that use electric motors as a source of propulsion. EVs utilize an onboard electricity storage system as a source of energy and have zero tailpipe emissions. Modern EVs have an efficiency of 59-62% converting electrical energy from the storage system to the wheels. EVs have a driving range of about 60-400 km before needing recharging.[2] The typical recharge time is 4 to 8 hours depending on the battery design, but can be faster thanks to a supercharger: charging half the battery in 20 minutes.[3] The efficiency of electric motors is superior to that of internal combustion engines and is improved further by integrating new technologies such as regenerative braking and active suspension.[4]

Parts an of electric vehicle and direction of the flow of electricity [7].

Electrochemical energy: Energy can be stored thanks to chemical properties. Chemicals are stored, and the reaction of these chemicals produces electricity.[8] These electric charges can be passed through a circuit in order to produce an electrical current. Batteries are the most common chemical energy storage systems in EVs.[9] Lithium ion batteries are currently the dominant battery system employed in EVs.[10] They have been an attractive choice for electric vehicles because they exhibit a high energy density and a long life cycle.[11]

Static energy: Energy may be stored as static electricity, caused by a build-up of electrons on an object. The build-up of electrons causes an imbalance of charge in the object, which can be released to create an electric current. Electrolytic capacitors are the most common form of static energy storage in an EV.[12] Currently, electrolytic capacitors are very popular in electric cars because they can increase the driving range of an EV and increase the battery's life span.[6] Graphene supercapacitors also exhibit the potential to act as the primary power source of an electric vehicle due to their short recharge times and relatively high power density when compared with the electrolytic capacitor.[13]

Kinetic energy: Energy stored due to momentum, is called kinetic energy storage. The most popular design in EVs is the flywheel.[12] The flywheel is a disk that spins on a fixed axis, storing energy in the form of rotational momentum.

While it is commonly known that EVs produce no tailpipe emissions (they don't have a tailpipe...) they do produce something called "upstream" emissions, or "beyond tailpipe" emissions (the term used by the EPA).[16] Click main article to learn more about these emissions.

The interactive map from the Alternative Fuels Data Center below shows the location of charging stations: