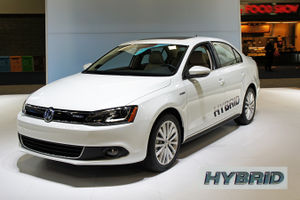 Hybrid cars are a type of motor vehicle that combines the benefits of both gasoline and electric vehicles. Their goal is to increase the mileage and reduce the emissions of a gas-powered car, while overcoming the shortcomings of electric cars such as short distances for their battery charge.[2] Gas-powered cars have an internal combustion engine and a fuel tank, while electric cars have electric motors and batteries. Both feed power to the transmission which delivers it to their respective drive train in order to move the car. Hybrid cars combine all of these parts into one system.

The arrangements of these parts differ in hybrid cars and can be arranged either in series or parallel:[2]

There are a few reasons why the hybrid car can be more efficient than normal cars, thereby having a better fuel economy.

First of all, the engine is smaller, meaning less weight for the car to have to accelerate. Smaller engine means smaller cylinders and pistons, which require less energy—and therefore fuel—to push them up and down in their reciprocating motion. Smaller engines also mean less cylinders so less fuel is required to give the car motion.[2]

While it may seem that a smaller engine would need more to match the power output of a normal gasoline vehicle, this isn't the case. These smaller engines in a hybrid car only need to achieve the average output of the engine, which allows them to be smaller. A normal gas-powered car must have bigger engines that are designed to achieve the maximum output needed.[2] When the hybrid car needs to achieve more output it doesn't use more fuel, instead it takes advantage of the electrical power from the batteries and motor.

When a car brakes, the kinetic energy of its motion is dissipated as heat. Hybrid cars can use the electric motor to slow the car down, and by doing so it acts as a generator supplying the batteries with some of this energy. Read more on the regenerative braking page.

Shutting Off the Engine

Since the engine is not necessarily needed to power the car due to its alternate power source, the engine can be shut off at certain times, for example when the car is stopped at a red light.[2]

Hybrid cars are most often shaped to reduce air drag, which acts against the motion of the car. Normal sports cars are shaped as such as well, but larger vehicles like vans or trucks lose a lot of efficiency due to air drag.

Hybrid cars also have special tires that give a smooth ride and give off less noise. They also provide good traction therefore reducing energy losses.