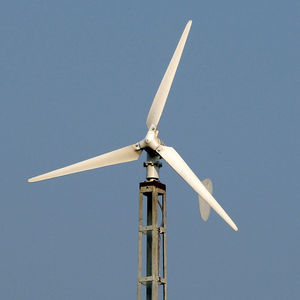 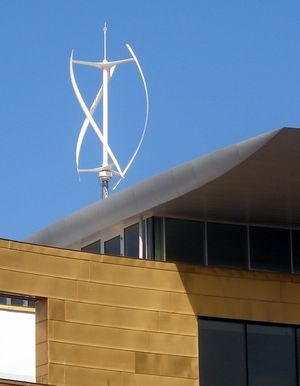 Horizontal axis wind turbines are the most commonly used turbines due to their strength and efficiency. The base of the towers have to be extremely strong, allowing the rotor shaft to be installed at the top of the tower which allows the turbine to be exposed to stronger winds. With the blades of the turbine being perpendicular to the wind, the rotation of the blades can generate more power compared to the vertical axis wind turbine. However, the construction of this type of turbine requires a heavy support for the tower to support the weight of the blades, gearbox and generator as well as utilizing a sizable crane to lift the components to the top of the tower.

In a situation where the wind is blowing downwards, the turbine structure may suffer from metal fatigue which could lead to a structural failure. This is resolved by designing the turbines with an upwind design. Additional yaw control is needed for the horizontal axis wind turbines in order to track the direction of the wind, to prevent damaging the turbine.[3]

Vertical axis wind turbines are less affected by frequent wind direction changes as compared to the horizontal axis wind turbines due to the blades being rotated on the rotor shaft perpendicular to the ground. With the blades and shaft installed in this way, the turbine does not need to rotate to track wind direction. The shaft is mounted near ground level due to the difficulties of mounting the shaft and its components on the tower. An advantage of being mounted at ground level is that maintenance of the turbine is easier and can be installed at locations such as rooftops. Disadvantages to this turbine installation is that the efficiency is lower due to air drag and the lower wind speeds compared to the higher wind speeds encountered at higher elevations.[3]