The Antarctic ice sheet plays an important role in global climate processes. Antarctica's ice sheet is between 1.6 and 6.4 kilometres thick and is the largest block of ice on Earth.[1] It is a key part of the Earth’s heat balance. The heat balance is also referred to as energy balance, which is the relationship between the amount of sunlight absorbed by Earth’s atmosphere and the amount of heat reflected back into space.[2] Today, there are only two ice sheets in the world: the Antarctic ice sheet and the Greenland ice sheet. Antarctica has a larger role than most continents in maintaining Earth’s heat balance. Ice is more reflective than land or water surfaces. The Antarctic Ice Sheet reflects a large amount of solar radiation away from Earth’s surface. As global ice cover (ice sheets and glaciers) decreases, the reflectivity of Earth’s surface also decreases. This allows more incoming solar radiation to be absorbed by the Earth’s surface, causing an unequal heat balance linked to climate change.[2] 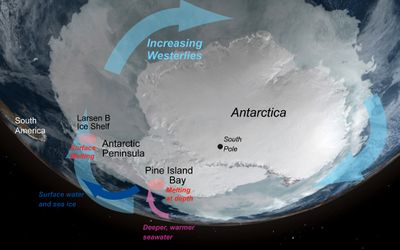 Figure 1. A map of Antarctica demonstrating how winds impact melting.[3]

The Antarctic ice sheet has caused the land under it to sink. Eastern Antarctica is about 2.5 kilometers below sea level because of the massive weight of the ice sheet above it.[2] NASA scientists have found that climate change has actually caused more ice to form in some parts of Antarctica.[2] This is occurring due to new climate patterns caused by climate change.[2] These patterns create a strong wind pattern called the ‘polar vortex’. Polar vortex winds lower temperatures in the Antarctic region and are building in strength in in the past 35 years, up to 15%.[2] Antarctica has been covered by an ice sheet for 40 million years.[2]

Melting ice sheets contribute to rising sea levels. The ice sheet is about 2 kilometers thick and if it melts, sea level would rise by about 60 meters.[1] As ice sheets in Antarctica melt, they raise the level of the ocean, putting coastal habitats at risk of being flooded. Melting ice sheets also reduce the ocean’s salinity. Tons of fresh water is added to the ocean every day by melting ice sheets. Large additions of fresh water change the ocean ecosystems. Organisms like coral depend on salinity in the water for survival and can’t adjust to a higher fresh water concentration habitat. Thermohaline circulation, the ‘ocean conveyor belt’, would be radically altered by melting ice sheets. This circulation regulates nutrient rich water from polar regions throughout the world's oceans in a long, slow loop. Circulation is influenced by temperature and density. Melting ice sheets would increase the amount of warm and fresh water in polar marine ecosystems.[1] This would slow down the movement of cold, saline, nutrient rich water, which is what the entire marine ecosystem depends on.[1] According to the United Nations, sea ice may decrease by 25% within the next century.[2]