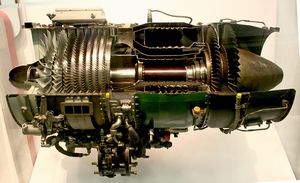 Figure 1. A jet engine gas turbine. The flow is from left to right, with labeling of parts in Figure 2.[1]

A gas turbine is a type of turbine that uses pressurized gas to spin it in order to generate electricity or provide kinetic energy to an airplane or jet. The process to do so is called the Brayton cycle. In all modern gas turbines, the pressurized gas is created by the burning of a fuel like natural gas, kerosene, propane or jet fuel. The heat generated by this fuel expands air which flows through the turbine to supply useful energy.[2]

Gas turbines are theoretically simple, and have three main parts as seen in Figure 2:[2]

Figure 2. A diagram of a gas turbine engine.[3]

In Figure 2, air is sucked in from the left and input to the compressors. Rows of fan blades compress the gas. In some turbines, the pressure of the air can get to 30x the input pressure.[2]

The high pressure air flows into this area, which is where the fuel is introduced. The fuel gets injected constantly into this part in order for the energy through the turbine to be constant.

The turbine is connected to the compressor blades by a shaft, and they spin separately. The compressors connect to the turbine which is connected to an output shaft, and because the turbine spins separately, it can get up to tremendous speeds due to the hot gas flowing through it. This final shaft generates enormous amounts of horsepower, with large airplane turbines generating nearly 110000 hp - twice the power generated by the Titanic.[4]