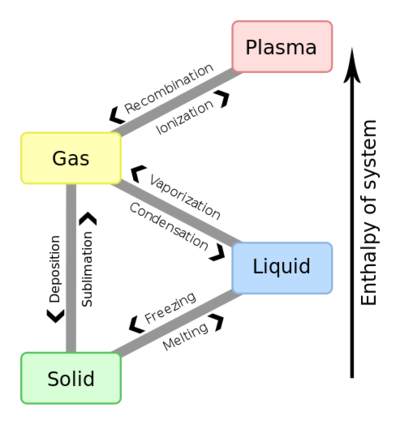 A phase change is when matter changes to from one state (solid, liquid, gas, plasma) to another. (see figure 1). These changes occur when sufficient energy is supplied to the system (or a sufficient amount is lost), and also occur when the pressure on the system is changed. The temperatures and pressures under which these changes happen differ depending on the chemical and physical properties of the system. The energy associated with these transitions is called latent heat.

Water is a substance that has many interesting properties that influence its phase changes. Most people learn from an early age that water melts from ice to liquid at 0°C, and boils from a liquid to a gas at 100°C; but this isn't true in all circumstances. The pressure affects these transition points, so for water, the boiling point actually decreases as the pressure decreases. Water also has certain intermolecular forces which govern the temperatures at which these transitions occur.[2] This difference in boiling point is why the directions for cooking at high altitudes are sometimes slightly different (like boiling pasta longer).

The relatively large amount of energy needed to change the phase of water is one of the reasons why water is used to cool power plants. It's also part of why humans sweat in order to stay cool (through evaporation) and dogs pant. This high latent heat also makes water important for moderating the climate.

Boiling/condensing and freezing/melting are the most common pairs of phase changes experienced on Earth. However, there are other phase changes such as sublimation—which is going straight from a solid to a gas. Figure 1 also shows phase changes that are rare (on Earth, at least) known as plasma. However, figure 1 does not show what happens when gases or liquids get to sufficiently high pressures and temperatures that they can't be distinguished. This phase is called the supercritical fluid state (which is useful for some modern power plants).