It is important to understand that climate and weather are not the same thing. Although both refer to meteorological events, it is the time scale of these events that separates the two. While climate generally looks at these events over a long period of time, weather is short-termed and can change rapidly and drastically.

Climate can be defined as the long-term trends of the weather. These can be any trends, ranging from the average expected weather patterns to the measure of the type and likelihood of extreme events.[1] Climate can, and does, change naturally. These non-human climate changes tend to be slower and less destructive than anthropogenic climate change. Please see natural climate change for a discussion of how climate has changed long before humans started releasing tremendous amounts of greenhouse gases into the atmosphere. The current rapid changes in Earth's climate, usually known as abrupt climate change are disconcerting because of their negative effects on human health and well-being. Figure 1, shown below, gives an idea of what the climates around the world are like. 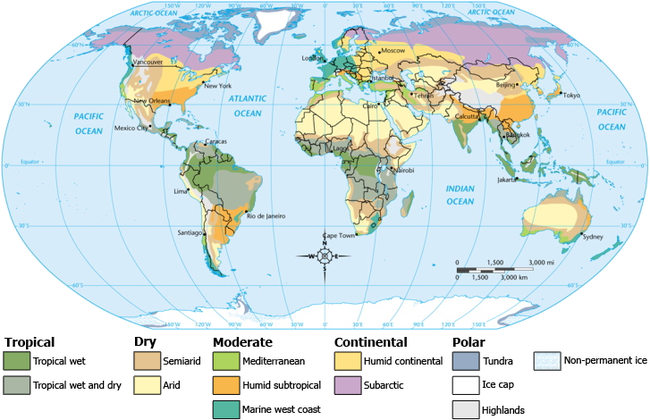 Figure 1. Climate consists of a series of weather trends that describe what the conditions generally are in an area. Above are some of the classifications for the worlds different climates.[2]

Weather, on the other hand, refers to the instantaneous or near-term state of the atmosphere in a given location. Put simply, weather is what the sky is doing right now. More generally, weather refers to what conditions such as temperature, precipitation and wind are doing over the course of seconds to hours, days, or even a week.[3] Phenomena such as snowstorms, tornadoes, and the passage of a warm/cold fronts are all examples of "weather." Weather can vary quite rapidly in a given location, in sharp contrast to climate which doesn't vary much. This is true on other planets as well. Mars, for example has both weather (wind storms for example) and climate (average temperature). One of the reasons that scientists are certain that climate change on Earth is anthropogenic (human caused) is by seeing that the climate on Mars isn't having appreciable changes. Figures 2 and 3 below show some different types of extreme weather.

This difference has been summed up as: climate is what you expect, weather is what you get. Climate is fairly easy to model compared to weather. Average temperature and rainfall for instance are the sort of things that experts can model using physical principles in a fair amount of detail. Weather changes quite quickly and chaotically, but still exists within a range of expected values.