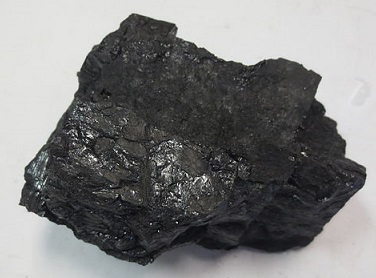 Coal is a rock made of almost pure carbon. The coal in different deposits have different compositions, therefore, coal is classified in various categories. Bituminous coal is the second highest quality of coal (below anthracite) and the most abundant type. Usually, bituminous coal comes from fairly old coal deposits (around 300 million years) and exhibits a carbon content that ranges from 76-86%.[2] The energy density of this coal is relatively high (27 MJ/kg), therefore, releases a significant amount of energy when burned.[3]

The high carbon and low moisture content of this particular type of coal makes it ideal in the production of steel and cement, as well as in electricity generation and coke production.[4] There are two subtypes (which are used differently) of bituminous coal: thermal and metallurgical.[5] Thermal coal, also referred to as steam coalis slightly higher quality than metallurgical coal with a slightly higher carbon content. Specifically, thermal coal is used in power plants that produce steam for electricity generation. Steam powered trains were also powered by thermal coal.

Metallurgical coal is referred to as coking coal and is used in the production of coke.[5] This coke is a source of carbon for making steel.

Burning bituminous coal poses serious health risks. First, this type of coal produces excessive amounts of smoke and soot and its high sulfur content contributes to acid rain through the release of sulfur oxides (SOx). As well, bituminous coal can contain harmful impurities such as arsenic and mercury, and these impurities are released into the air as pollution when the coal is burned. Burning bituminous coal also releases nitrogen oxides (NOx), carbon monoxide, and carbon dioxide.[5]