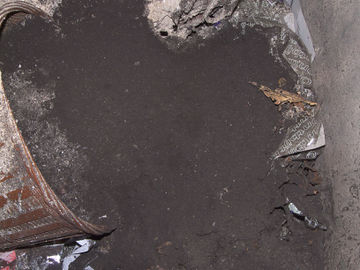 Soot, sometimes called lampblack or carbon black, is a fine black or brown powder that can be slightly sticky and is a product of incomplete combustion. A major component of soot is black carbon (see below). Since soot is sticky, it tends to stick to exhaust pipes and chimneys where the combustion occurs.[2] In pollution terms, soot is the common term for a type of particle pollution known as PM 2.5, which is particulate matter 2.5 micrometers in diameter or smaller. Soot is composed of a variety of chemicals and its exact composition depends strongly on what is being burned.[3]

The formation of soot can be a problem. In places such as chimneys, the formation of soot can result in clogged chimneys that cannot draw out smoke as efficiently. This can lead to smokey fires or the inefficient use of fuel. If soot is allowed to build up in the chimney for too long, it can cause a fire. Additionally, soot is a pollutant and has a range of environmental and health effects.

A major component of soot is black carbon which absorbs more light than any other form of particulate matter. Black carbon can absorb 1 million times more energy than the same mass of carbon dioxide.[4] This absorption of energy and its interaction with clouds means that black carbon is a major concern for climate change. It is linked to higher temperatures and melting of ice and snow, particularly in sensitive regions such as the Arctic and the Himalayas.[5]

For more information on black carbon, visit the U.S. EPA.

The formation of soot is an issue as it is one of the byproducts of fossil fuel combustion - particularly from coal. It is emitted by a wide range of sources both industrial and residential, and enters the air causing air pollution.[3]

Although a somewhat harmful byproduct of combustion, soot can be used as a pigment for inks and dyes (in fact both lampblack and carbon black are dyes made of soot). Soot is used in a vulcanization process to treat rubber, and is used in toners for laser printers and copiers. Historically, soot was a component of cosmetics and used for camouflage paint.[2]

Similar to smoke or ash, soot can be harmful to human health when inhaled. The incomplete combustion necessary to produce soot results in the formation of dioxins and other toxic compounds ].[2] The small size of particulate matter allows it to easily enter the lungs and bloodstream. This can cause serious effects including heart attacks, bronchitis, aggravated asthma, strokes, and even premature death.[3]

There are several harmful environmental side effects associated with soot. Soot causes haze, which decreases visibility dramatically. Some of the compounds in soot - primarily sulfur dioxides and nitrogen oxides - react in the air with moisture to form acid rain. This can then fall and acidify lakes and rivers, harming a variety of different ecosystems.[3]