Compressed air energy storage or simply CAES is one of the many ways that energy can be stored during times of high production for use at a time when there is high electricity demand.

CAES takes the energy delivered to the system (by wind power for example) to run an air compressor, which pressurizes air and pushes it underground into a natural storage area such as an underground salt cavern. At a later time, when there is electricity demand, the pressurized air is released back to the surface and heated. The air is then used to turn a turbine, which generates electricity. CAES may be stored for a long period of time (several months), and is a technology that may be used for energy storage on a large scale. The efficiency of CAES ranges anywhere from 60-80%.[1] 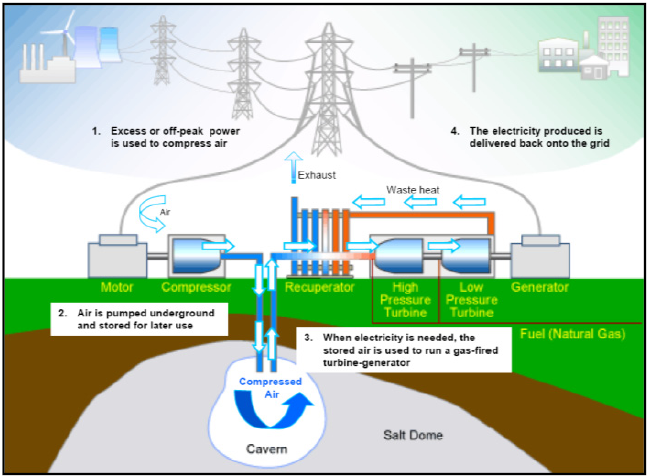 In current CAES technology, the compressed air used to create electricity is supplemented with a small amount of natural gas or other fuel. A different type of CAES that aims to eliminate the need of fuel combustion, known as Advanced Adiabatic Compressed Air Energy Storage (AA-CAES), has recently been developed. AA-CAES stores the heat created during the initial air compression for use in the electricity generation section of the cycle. While this would entirely eliminate the need for fossil fuels in the energy system, research shows that the efficiency of this process is extremely low, around 50%.[2]

The first is located in Huntorf, Germany, and was completed in 1978. The plant takes two hours to discharge all of the energy from the air stored and has a capacity of 290 MW. This plant was intended to be a way for nuclear power plants to start up without using electricity from the grid.[3]

In 1991, a second CAES facility was completed in McIntosh, Alabama.[3] This facility was originally built for demonstration purposes, and has a capacity of 110 MW. It is able to generate electricity in 26 hour intervals.

In December 2012, a third CAES facility was completed in Gaines, Texas.[4] This project was constructed to have a capacity of 500 MW.

In 2013, the world’s first AA-CAES facility was approved for construction in Germany. The Adiabatic CAES for Electricity Supply, or ADELE,[5] hopes to be able to store and convert energy at an efficiency of 70% or greater. The project will attempt to be the first CAES facility that does not need additional fuels in order to produce the required heat.