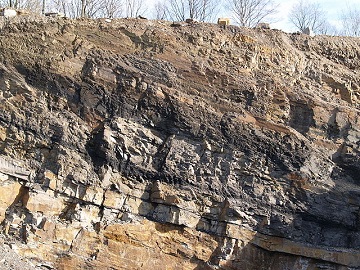 A coal seam is a dark brown or black banded deposit of coal that is visible within layers of rock. These seams are located underground and can be mined using either deep mining or strip mining techniques depending on their proximity to the surface. These seams undergo normal coal formation and serve as a conventional coal resource. The reserves of coal are immense, and are the largest of all of the fossil fuels.[2]

As well, these seams can act as an unconventional source of natural gas. When natural gas is obtained from a coal seam, it is known as coal seam gas or coal bed methane. This gas bonds to the surface of underground coal seams, which are generally filled with water. The pressure of this water makes the gas form a thin film on the surface of the coal. The level of gas bonded to the coal seam depends on the thickness of the coal, the depth of the coal, and the permeability.[3]

Coal seams are formed from dead and decaying organic matter. Generally, this matter came from ancient peat bogs that died and fell into shallow, stagnant waters. As this material decayed, it became peat over time. As this peat was buried under sediment, the temperature increased and the pressure became greater. This compression and heating slowly turned the soft peat into harder lignite coal. With further burial and compression this brown lignite coal became sub-bituminous coal, then bituminous coal, and finally anthracite coal.[4] Regardless of the size or placement of the coal seam this formation pattern remains the same.

The size, location, and accessibility of coal seams can vary widely. Due to extreme pressures involved in the compression of the peat in the formation of coal, about 10 meters of peat will only form around 1 meter of coal. However, the thickness of the coal bands can vary significantly depending on the amount of peat that was initially buried. Coal seams have been found that are as small as 30 centimeters (or approximately a foot) all the way up to more than 30 meters wide.[2] Additionally, these seams can be buried either very deeply or fairly close to the surface. Most of the time the deeply buried seams are mined using deep mining techniques whereas ones close to the surface are obtained through strip mining. 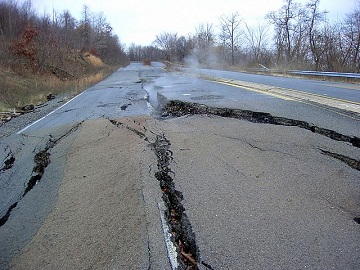 Figure 2. A portion of a highway destroyed by the Centralia mine fire.[5]

Coal seams can pose a fire hazard, and as a result sometimes begin to smoulder. Generally, these fires are ignited by above ground fires but can continue to smoulder underground for many years. Sometimes these fires can burn for decades or centuries until the fuel below the surface is used up or the fire is extinguished. One of the most widely known coal seam fires is the Centralia mine fire, which has been burning since 1962.[6] Although dangerous and important to put out, these fires are costly and difficult to extinguish. Internationally, thousands of underground coal fires are burning on every continent except Antarctica.[7] These fires are hazardous as they release toxic fumes - including carbon dioxide, methane, and mercury - and can spark new above ground fires.[7] Global coal fire emissions are estimated to cause 40 tonnes of mercury to enter the atmosphere annually and represent 3% of the world's yearly carbon dioxide emissions.[7]