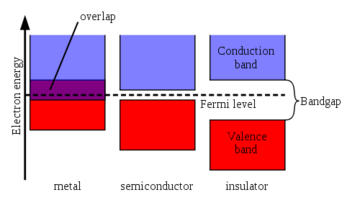 Figure 1.[1] A diagram showing the valence and conduction bands of insulators, metals, and semiconductors. The Fermi level is the name given to the highest energy occupied electron orbital at absolute zero.[2]

Insulators are characterized by a large band gap, so a prohibitively large amount of energy is required to move electrons into the conduction band to form a current.[5] Conductors have an overlap between the conduction and valence bands, so the valence electrons in such conductors are essentially free.[4] Semiconductors, on the other hand, have a small band gap that allows for a meaningful fraction of the valence electrons of the material to move into the conduction band given a certain amount of energy. This property gives them a conductivity between conductors and insulators, which is part of the reason why they are ideal for electric circuits as they will not cause a short circuit like a conductor.[2] This band gap also allows semiconductors to convert light into electricity in photovoltaic cells and to emit light as LEDs when made into certain types of diodes. Both these processes rely on the energy absorbed or released by electrons moving between the conduction and valence bands.