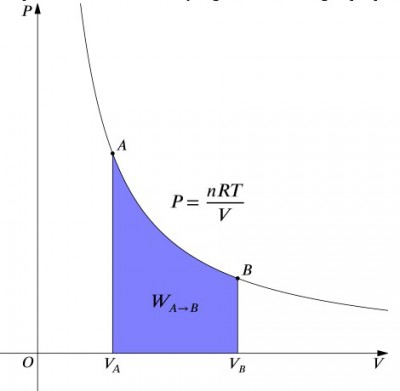 The Pressure volume diagram of an isothermal process.

Isothermal refers to a process in which a system changes—whether it be the pressure, volume and/or contents—without the temperature changing. From the point of view of the first law of thermodynamics, this means that the internal energy of the system is unchanged, since temperature is a measure of the average kinetic energy of molecules within the system.[1] The total energy of the system (and the enthalpy) often changes in isothermal processes though. The first law of thermodynamics can be expressed mathematically as:

Which can be simplified to show that the amount of heat and work is exactly equal when there's no change in temperature:

This expression means that the work input to a system must be exactly balanced by a heat output, and vice versa. If an insulated container containing air is compressed (decreasing its volume, positive [math]W[/math] value), then heat must be removed from the system in accordance (negative [math]Q[/math] value). In contrast, if a container is allowed to expand (negative [math]W[/math]), then heat must be added to the system in order to keep the temperature constant. To calculate work, an integration must be done to the formula [math]W = -∫pdV[/math]. This can also be thought of as calculating the area under the curve. However, due to the shape of the curve, it's not as simple of a calculation—in comparison to an isobaric process, for example. The formula below is the integrated equation, and will calculate the work done for any isothermal process:

The following video from UC Berkley's chemistry department explains the idea of an isothermal process with visuals.

Full Integration of the Work Equation