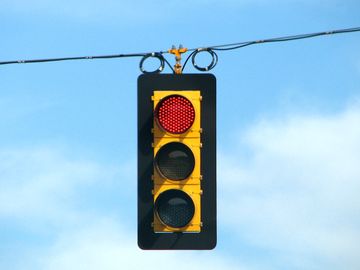 Figure 1. An LED traffic light on red.[1] Note that each individual little circle is a separate LED.

Light emitting diodes or LEDs are electronic components that exploit the movement of electrons in diodes to produce light. These LEDs have numerous advantages over other forms of illumination, including high efficiency and a long lifespan. LEDs are now widely used in products like traffic lights, some smartphone screens and digital clocks.[2]

When current flows through a diode, electrons combine with positive "holes" within the diode (see diode operation for more information). In this process, the electrons continuously move from a high energy conduction band to a lower energy orbital surrounding each of the holes. Electrons are said to have more energy the farther they are from positively charged nuclei, so this jump from a conduction band to an orbital surrounding a nucleus is energetically favorable. This means that energy is released in the process in the form of a photon. Although all diodes undergo this phenomenon, electrons in the standard silicon diode undergo a much smaller drop in energy than for visible LEDs, which results in the production of photons of a lower energy, namely in the infrared spectrum. [3] These infrared LEDs are useful in applications like remote controls. 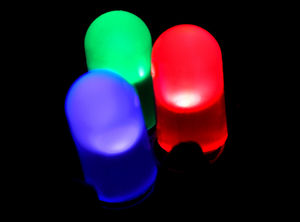 Visible LEDs are specifically constructed so that the energy released by electrons filling the holes in the diode corresponds to photons of visible wavelengths of light. Furthermore, the plastic housing around most LEDs focuses the light in one direction. Although standard diodes end up absorbing a significant fraction of the photons released in them, LEDs are designed to project photons outward from the diode (see Figure 2).[5]

A principle challenge during the emergence of LEDs was the difficulty in finding the right combination of doping materials and coatings to produce coloured light. For example, as recently as the 1990s Shuji Nakamura's invention of blue LEDs were commercialized.[6] He won a Nobel Prize in Physics for his invention in 2014, as this discovery allowed for the invaluable pioneering of high-efficiency white LEDs as well. For more information on Shuji Nakamura and his Nobel Prize, see here.