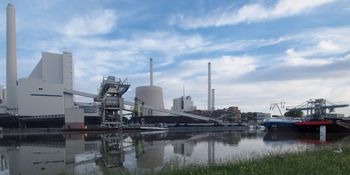 Supercritical coal plants are a type of coal-fired power plant used in more modern designs. They differ from traditional coal power plants because the water running through it works as a supercritical fluid, meaning it is neither a liquid or a gas. This occurs when water reaches its critical point under high pressures and temperatures, specifically at 22 MPa and 374oC.[2]

As a liquid approaches its critical point, its latent heat of vaporization begins to decrease until it reaches zero at the critical point.[2] This means that the amount of energy needed to change the water into steam becomes less and less, and eventually the water's vaporization phase change is instant. This reduces the amount of heat transfer to the water that is normally needed in a conventional coal plant, therefore, less coal is used to heat the same amount of water. This increases the plant's thermal efficiency by a considerable amount.[3]

Improved efficiency corresponds to fewer greenhouse gas emissions, as well as pollutants like NOx, SOx, and particulate matter which all cause adverse health effects. A supercritical coal plant (as opposed to a traditional coal plant) will decrease waste heat produced by 25%, and cut pollution and CO2 by roughly the same amount.[4]