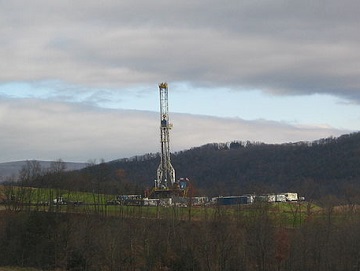 Finding shale gas uses the same basic methods for exploring for traditional petroleum deposits combined with specialized techniques for finding shale gas. 2D and 3D seismic profiles (generated by monitoring acoustic waves that have reflected off of rocks) are used for determining the depth and properties of shale deposits and drilling is used to observe the rock's physical and chemical characteristics while determining the quality and quantity of the shale gas.[4]

Generally speaking shale formations have low permeability, thus fluids do not flow easily through the formation and generally require extra effort to access gas or oil trapped within them. Because of this, special techniques such as fracturing must be used to produce shale gas. Since accessing shale gas is difficult and requires special techniques, shale gas is considered an unconventional resource.[3]

There are two major drilling techniques that are used to access shale gas. The first of these is horizontal drilling, which is where a well is drilled into the rock formation that starts going straight down, and then bends so that there is a horizontal part to the borehole as well.[3] When the rock formation is hit, the drill bit is moved to drill horizontally which exposes the well to more of the shale that is producing the gas.[2] The horizontal section of the well bore is usually from 1 to 3 kilometres long.[4]

The second method is known as hydraulic fracking or hydrofracking (or sometimes just fracking). In this technique water, chemicals, and sand are pumped into the shale gas well. This opens fractures in the rock and allows natural gas from the shale to flow into the well. Without these techniques, natural gas does not flow to the well quickly and the wells are not economical.[2]

Although natural gas burns more cleanly than oil or coal, there are still environmental issues associated with the drilling and production of shale gas. The first issue is that the drilling and fracturing of these wells requires a large amount of water. In some areas, significant water use for shale gas could affect the availability of water for other uses or affect aquatic habitats. In addition, drilling and fracturing produces large amounts of waste water that can contain contaminants. This results in the water requiring treatment before disposal or reuse. How waste water should be treated and disposed is a complex issue. Additionally, hydraulic fracking fluid can be a contaminant if not managed properly as spills or leaks could occur. The chemicals in the fracking fluid can be dangerous, and any release of the fluid could result in contamination of groundwater for drinking or habitats for wildlife.[2]

Some have also argued that methane emissions from drilling and hydraulic fracturing are significant. Although large amounts of methane are produced, most gas produced is captured and flared or gathered for processing and sale. Once the well is completed this gas is processed the same way gas from conventional wells is, so although there are significant amounts of methane emissions produced, they are no different than emissions from other natural gas wells.[4]