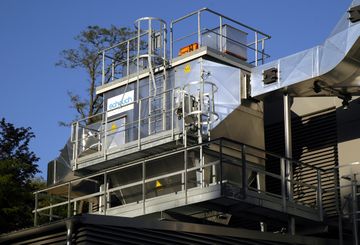 An electrostatic precipitator is a type of filter (dry scrubber) that uses static electricity to remove soot and ash from exhaust fumes before they exit the smokestacks.[2] This one common air pollution control device. Most power stations burn fossil fuels such as coal or oil to generate electricity for use. When these fuels undergo combustion, smoke is produced.[3] Smoke consists of tiny particles of soot that are suspended in hot, rising air. These unburned particles of carbon are pulled out of the smoke by using static electricity in the precipitators, leaving clean, hot air to escape the smokestacks.[2] It is vital to remove this unreacted carbon from the smoke, as it can damage buildings and harm human health - especially respiratory health. 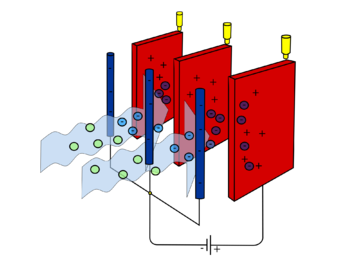 The operation of electrostatic precipitators is fairly simple. The dirty flue gas escaping through the smokestack is passed through two electrodes. The shape these electrodes take depends on the type of electrostatic precipitator used, but they can be metal wires, bars, or plates inside a pipe or the smokestack itself. One of the electrodes is charged with a high negative voltage, and this plate causes particulates inside the smoke to obtain a negative charge as they pass by this electrode.[2] Further along the pipe, the second electrode carries a similarly high positive voltage. Based solely on the fact that opposite charges attract, the negatively charged soot particles are pulled towards the positive electrode and stick to it. Occasionally these plates must be cleaned to remove the accumulated soot and dispose of it into a hopper. The soot and ash collected from coal burning power plants in this manner is referred to as fly ash.[5]

Even though most electrostatic precipitators work in a similar way, there are many variations and different types that work better for different sized particles, different smoke compositions, and different amounts of pollution. The need for a variety of designs comes partly from the fact that coal burned around the world varies in its chemical composition drastically. Other power plants may look to remove certain pollutants - such as sulfur dioxide - or look to minimize the amount of ash produced. Additionally, some low-sulfur coals that are burned have a higher electrical resistivity, which makes it more difficult to remove the ash produced by this coal using electrostatic precipitators.[2]