Doping is the practice of introducing very small amounts of certain foreign atoms into the crystal lattice of a semiconductor to modify its electrical properties. These foreign atoms are referred to as dopants. Often they add charge carriers to the semiconductor by creating either an excess or a deficiency of electrons around the foreign atom.[1] This leads to two distinct types of doping, p-type and n-type. P-type and n-type doping allows for the creation of important circuit components like diodes and transistors.[2] 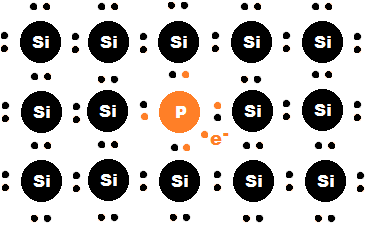 Figure 1. A simplified diagram of an n-type semiconductor.[3] Only four of the valence electrons of the phosphorus atom are used for bonding, leaving one electron free. 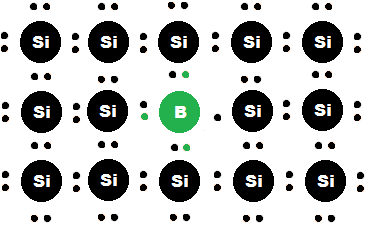 Figure 2. A simplified diagram of a boron-doped p-type semiconductor.[3] Note the missing electron on the right side of the boron atom. This deficiency constitutes a "hole".

When an atom with one fewer valence electron than silicon is added to a silicon lattice, electron deficiencies are created (see Figure 2). These deficiencies are often called "holes".[6] These holes readily accept free electrons and complement n-type semiconductors as the excess electrons of the n-type can be absorbed by the p-type. This property is integral to the p-n junction, a vital component in the operation of a diode. P-type dopants have three valence electrons, and they include boron, aluminum, and gallium.[7]