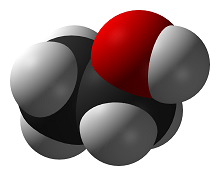 In chemistry terms, ethanol is an alcohol, also referred to as ethyl alcohol or drinking alcohol. As shown in figure 1, ethanol has the chemical formula [math]\ce{C2H5OH}[/math]. Ethanol can be used as a fuel since it can produce heat energy as a result of alcohol combustion.

Ethanol is a clear, colourless liquid with a smell that is referred to as the characteristic alcoholic odour.[2] Ethanol is primarily used as a solvent when making varnishes and perfumes and as a preservative for biological specimens. Additionally, ethanol is used as a disinfectant and it can also be consumed as a drink.[3] Ethanol derived from biomass (bioethanol) is a gasoline additive or an alternative fuel.

Most ethanol is usually produced in one of two ways, using either petroleum or biomass. Petroleum derived ethanol happens in large chemical plants through a petrochemical process.[4] Raw materials are separated from petroleum through fractional distillation. Ethane ([math]\ce{C2H6}[/math]), one of the separated raw materials, goes through cracking to become ethene ([math]\ce{C2H4}[/math]), also referred to as ethylene. Ethene is converted to ethanol through a hydration process that requires a catalyst (often phosphoric acid) while the ethene reactant is under high pressure steam in the reaction chamber.[4] High pressure increases the reaction rate, so that more ethanol will be produced. This hydration process has the following exothermic chemical reaction which releases heat energy:

The ethanol produced using biomass is known as bioethanol, and this process is explained on the bioethanol page.

Below is a table of some of the basic properties of ethanol.

Ethanol is used as a combustible fuel. Below is an animation showing the net reaction that occurs during the combustion of ethanol. It should be noted that ethanol requires oxygen to undergo combustion. While the CO2 will eventually be taken up in plant matter, it isn't immediate, see carbon dioxide atmospheric residence time.

The alcohol combustion reaction releases heat energy and is an example of an exothermic reaction. The reaction also has a negative enthalpy change (ΔH) value.