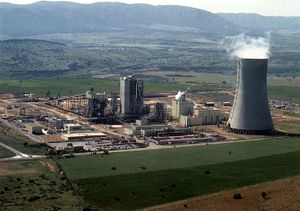 Integrated gasification combined cycle (IGCC) is a process of generating electricity from coal, petroleum or biomass while reducing the amount of carbon dioxide and other flue gases released. The cycle combines carbon capture and storage with combined cycle generation to maximize efficiency of the fuel, while also emitting less pollutants.[2]

See combined cycle gas plant for a video showing the workings of the general form of this power plant.

First, the fuel is turned into a synthesis gas (also known as syngas) within a gasification chamber. This process also creates steam. The hot syngas is then sent through a cleaning chamber, which removes a large portion of sulfur, mercury and particulate matter. The carbon dioxide is also removed via carbon capture, and can be stored underground or elsewhere.[3]

The cleaned fuel is then sent to a gas turbine and generator to produce electricity. The excess heat from the exhaust gases is sent to create more steam, which is added alongside the initial batch of steam to a steam turbine, which generates electricity as well.[3]

The IGCC can handle various types of fuel, including coal, waste, coke, petroleum, biomass or a mix of these. It can also burn natural gas in the turbine as a secondary fuel while the primary fuel components are under maintenance.[2]

Aside from only generating electricity, the plant can also divert the waste heat from its processes to provide district heating (cogeneration).

Plants may also be optimized to produce other useful products such as synthetic natural gas, hydrogen, and more.

Moreover, the captured carbon dioxide from the cleaning stage can be made useful elsewhere.[2]