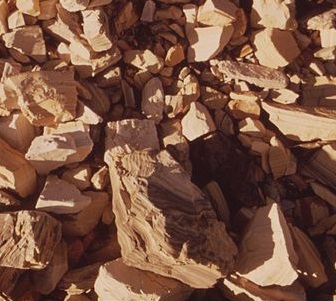 Kerogen is a waxy, insoluble organic substance that forms when organic shale is buried under several layers of sediment and is heated. If this kerogen is continually heated, it leads to the slow release of fossil fuels such as oil and natural gas, and also the non-fuel carbon compound graphite.[2] Shales that are especially rich in kerogen can actually be burned directly, but only have seen limited use as a fuel throughout history.[3] During petroleum generation, bitumen also forms from kerogen.[4]

There are different types or classes of kerogen. Type I consists mainly of algae and is the most likely type of kerogen to produce oil when exposed to high temperatures. Type II is a type of kerogen that is composed of a mix of terrestrial and marine organic materials and can sometimes produce oil. Type III kerogen is composed mainly of wood-like material along with some algae and plankton, generally creating natural gas.[4]

Kerogen is considered to be a major carbon sink in the carbon cycle, containing nearly 1016 tonnes of carbon.[5] As well, the ability to study kerogen has led to insight in the formation of sedimentary rocks and how these organic materials are incorporated into these rocks.

The formation of kerogen represents a major step in the formation of oil and natural gas, as kerogen serves as the source of these fossil fuels. For kerogen to form, dead phytoplankon, zooplankton, algae, and bacteria must sink to the bottom of an ancient still water environment. After, this dead material must mix with inorganic, clay-like materials that enter these oceans from streams and rivers. This creates an organic-rich mud - which cannot be exposed to too much oxygen or else the organic matter within the mud is decomposed too quickly by bacteria. Before this organic matter is destroyed, it is buried by more sediment and lithifies (becomes sedimentary rock), creating organic shale.[2] If this shale is buried between 2 and 4 kilometers, its temperature increases due to its location in the Earths interior. This increasing pressure and temperature of the shale finally transforms it into kerogen.[3]