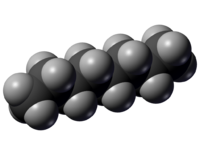 Organic molecules are molecules that are made of carbon and hydrogen, and can include other elements. Organic molecules must contain carbon atoms covalently bonded to hydrogen atoms (C-H bonds). They usually involve oxygen and can also contain nitrogen, sulfur, phosphorous, and others. Hydrocarbons, like alkanes, alkenes and alkynes are all organic molecules and so are alcohols, carboxylic acids and carbohydrates. Many organic compounds are formed from chains of covalently-linked carbon atoms with hydrogen atoms attached to the chain (known as a hydrocarbon backbone).[2]

Most (85% or so) of the world's primary energy comes from fossil fuels, which are made up of mostly organic molecules. These organic molecules undergo combustion - they react with oxygen from the atmosphere and produce carbon dioxide. This process typically involves an exothermic reaction which releases heat energy that is converted into usable energy, usually with a heat engine.

Organic chemistry is a vast field that takes many years of study to fully understand; to get a start, please see UC Davis's chem wiki.