Minerals are defined as naturally occurring inorganic solids with defined chemical compositions and an ordered internal structure.[1] Mineral deposits are mined world-wide as sources of materials for electronics manufacturing, vehicle manufacturing, fertilizer production, filler and primary construction materials, pharmaceutical manufacturing, and as precious gemstones.[2] Almost all minerals can be fit into one of six main groups, each named for the primary anion that is responsible for forming the building blocks of the internal repeating crystal structure; silicates, carbonates, sulfates and sulfides, phosphates, oxides and hydroxides, and halides. 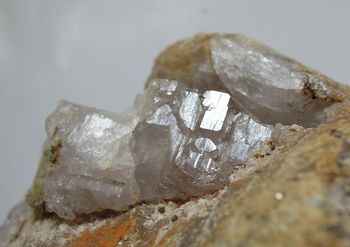 Silicates are the most common mineral group found within the Earth's crust, and include a wide swath of minerals from Quartz to Tourmaline to Clay.[3] The basic building block of all silicate minerals is the silica tetrahedron (SiO2), consisting of four Oxygen atoms arranged around a central Silicon atom. These silica tetrahedron can then connect in various geometries, as a stand alone tetrahedron (Orthosilicates), forming a two-tetradhedral bond (Disilicates), six-tetrahedral rings (Cyclosilicates or ring-silicates), single and double chains (Inosilicates or Chain-silicates), large flat sheets (Phyllosilicates or Sheet-silicates), and large complex three-dimensional structures (Framework or Tectosilicates)[3]. The types of silicates and some of the most common everyday minerals associated with each type are listed in the table below. 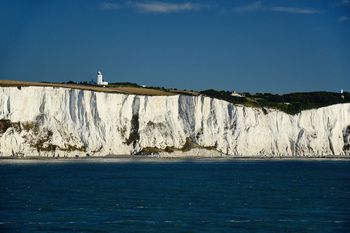 Carbonate minerals are minerals that use the CO32- carbonate group as a primary building block. Common carbonate minerals include Calcite (CaCO3), Dolomite (CaMg(CO3)2), and various copper-bearing minerals mined for industry. Rocks like Limestone and Marble are composed of carbonate minerals, and are formed in low-energy depositional environments like the deep ocean where the shells of microscopic organisms fall to the floor and collect to form layers of carbonate skeletons which eventually lithify into rock.[7] Figure 2 shows the White Cliffs of Dover in England. These cliffs are the result of the accumulation of billions of tiny carbonate skeletons in an ancient ocean basin that eventually lithified into rock and were brought back up to the surface.

Sulfur acts as an anion (S2- or S22-) in sulfide minerals, and as a cation in the sulfate minerals where it forms the building block SO42-. Sulfide minerals are metallic and many form as hydrothermal or metamorphic alterations of previous minerals.[8] The most common of these include Galena (PbS2) and Pyrite (FeS2) which is colloquially known as "Fool's gold". 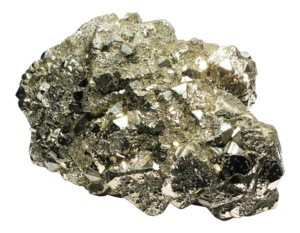 Sulfate minerals are often separated into hydrated and anhydrous forms. The two most common Sulfate minerals are Anhydrite (CaSO4) and its hydrated counterpart Gypsum (CaSO4•2H2O). These hydrated forms do not actually form ionic bonds with the water molecules, but rather incorporate the water molecules into open spaces inside the crystal lattice which means that the water can be driven off if the hydrated mineral is baked at a high enough temperature for a period of time, turning the mineral into its anhydrous form. Gypsum and Anhydrite are used as fillers or primary components in construction materials such as cement and drywall, as well as having many medical applications that utilize the Calcium component of the molecule.[3] Sulfate minerals are commonly formed alongside Halides and phosphates as evaporite deposits when large bodies of water dry up. 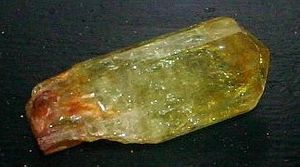 Figure 4. A picture of Apatite which is the most common Phosphate mineral.

Phosphate minerals are defined by their use of the PO42- building block, and are quite rare to find in abundance. Even the most common Phosphate mineral, Apatite (Ca5(PO4)3(OH,F,Cl)) which can be found in bones and teeth, is found only as a minor "accessory" mineral within other mineral deposits. The phosphorous in Apatite is extracted for use in fertilizers and industry, and Fluorine (when present) is extracted for treating drinking water.[3] 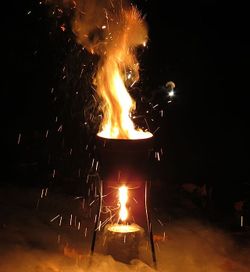 Figure 5. Iron oxide (III) being used in a thermite reaction, dropping into liquid nitrogen below.[9]

Oxide and Hydroxide minerals incorporate into their crystal structure Oxygen (O2-) and the hydroxyl group (OH-) respectively. Many minerals can undergo oxidation under atmospheric conditions or under favourable hydrothermal conditions and produce oxide or hydroxide forms. Limonite is the name for a group of reddish-brown iron-oxide minerals that are more commonly referred to as "rust". The other two metals most common in forming oxide and hydroxide minerals are Aluminum and Manganese. Metallic oxides in powdered form were used as a welding material for railway ties during the construction of the Canadian Pacific railway in the 1800s.[10] 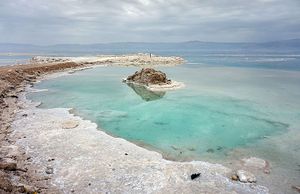 Figure 6. The crusty-looking white material is rock salt, seen here along the shoreline of the hyper saline Dead Sea.

Halides are fairly uncommon to find in abundance with the exception of halite rock salt (NaCl), fluorite (CaF2), and sylvite (KCl). These minerals form their basic building-blocks using elements from the halogen group in the periodic table. While halite and sylvite are used extensively as a food seasoning in many parts of the world, fluorite also has a plethora of uses, including as a metallurgical flux for smelting, the creation of hydrofluoric acid, for ceramic glazes, and as a gemstone due to its natural double-pyramid cleavage pattern. The most abundant halide, Halite, is formed as an evaporite deposit where a body of water with dissolved halide constituents is allowed to evaporate completely, causing the halide minerals to precipitate out of solution.[11]