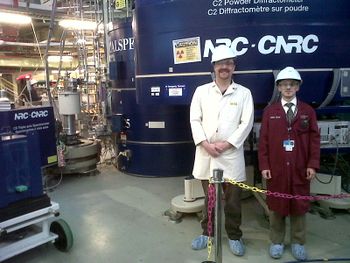 Figure 1. Jason Donev and Daniel Banks in front of the NRX research reactor in Chalk River, ON.[1]

Research reactors are nuclear reactors that are not used for the generation of electricity. Instead they provide uses for research and training, material testing, and production of isotopes for medical and industrial uses.[2] For more than 60 years, research reactors have been providing a source of neutrons for a wide variety of scientific purposes,[3] and there are around 240 research reactors operating in 56 countries worldwide.[2]

They are small in relation to the reactors that provide electricity to the grid, with their power output ranging from 0 to 200 MWt (thermal rating rather than electrical output rating, since they do not produce electricity!). In fact, the total power of all of the research reactors worldwide is just under a 3000 MWt, comparable to a single power reactor.[3] They are also simpler and operate at lower temperatures. They require far less uranium fuel than power generating reactors, however the uranium enrichment must be higher, typically up to 20% concentration of 235U.[3]

There is a much wider array of designs for research reactors compared to power reactors.[3] The number beside each shows how many there are operating worldwide.

There are many uses for research reactors. Their production of neutrons are very useful because neutron beams are suited to studying materials at the atomic level.[2] Neutrons are also used for radioisotope production for medical industries, irradiation for material testing for fission and fusion reactors, neutron transmutation doping (NTD) of silicon, and more.[3]

Their use for training of all areas in the nuclear industry are extremely important, as operators, maintenance staff, radiation protection personnel, teachers and students can make use of their facilities.[3]