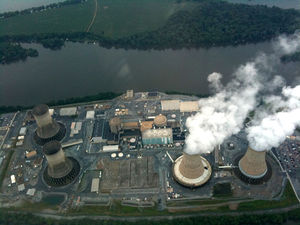 Three Mile Island nuclear accident occurred on March 28, 1979 at the Three Mile Island nuclear power plant, located near Middletown, Pa., U.S.A.[2] A partial meltdown occurred in the core of nuclear reactor number 2 (TMI-2), and caused the most serious accident in civilian U.S. nuclear power history. However, the small release of radioactive materials had no detectable health effects on the public.[2][3] The SL-1 disaster was more serious, as it killed the three people operating the reactor, but SL-1 was a military reactor, not a civilian one.

In the aftermath of the event, sweeping changes were made to regulation and operation of nuclear power plants. Operator training, emergency response systems, engineering, radiation protection, and many other areas were addressed and significantly improved.[2]

Events leading to the disaster

At 4:00 am, the reactor was running at 97% power when a fairly minor problem in the secondary section (See Figure 2) caused the temperature of the primary coolant to rise. This caused the reactor to shutdown immediately, which occurred in a couple of seconds. The fault occurred when a relief valve failed to close, went undetected by the workers, and caused a large amount of the coolant to drain away. This caused the core to overheat, resulting in partial meltdown and severe damage. A combination of equipment malfunction, design problems, and worker error led to the partial meltdown in TMI-2.[3] 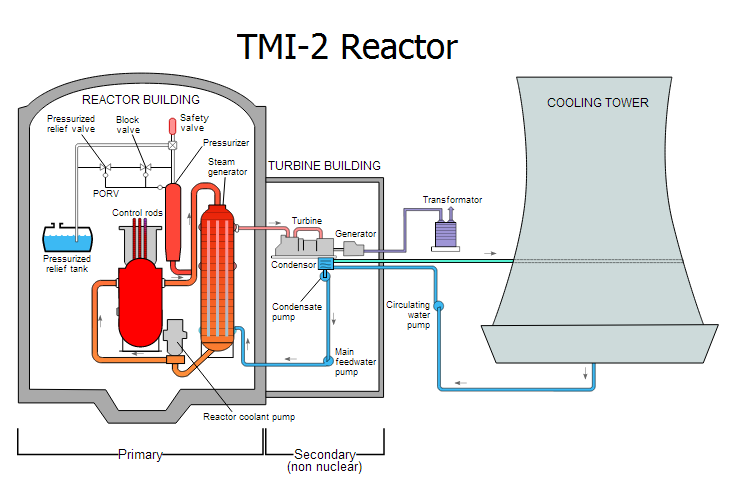 To start the chain of events, a mechanical or electrical fault prevented the main water pumps from receiving steam from the core. This caused the steam turbine and generator to shut down followed by a shutdown of the core—which increased the temperature and pressure in the primary section (Figure 2). In response, the pressure relief valve opened, and should have closed after the pressure returned to normal. However, it got stuck and the operators were unaware of this fact. This caused a 'loss of coolant accident', which meant the coolant drained and nothing was cooling down the fuel inside the core.[2]

Due to inadequate alarm signals, the operators were unaware of the real problem and began to make a series of actions which made the situation worse.[2] Since they thought that the primary section had sufficient amount of coolant circulating, they shut down any input of coolant from the secondary section. However, the core was in fact starved of coolant, and in turn overheated.[2]

The fuel assemblies inside of the core ruptured, and the uranium fuel pellets began to melt. Even though around half of the core experienced a meltdown, the effects outside of the plant were minimal.[2] Within a few hours response teams investigated the site, with non-essential personnel evacuated. By the evening, the core appeared to be adequately cooled, however, the problems were not over yet.

Authorities were worried for the population's safety, and advised pregnant women and children to leave the area of a 5 mile radius around the plant.[2] Furthermore, through chemical reactions inside of the core, a large hydrogen bubble formed in the pressure vessel—which had the potential to burn or explode. An explosion, worst case scenario, would release containments. However, on April 1st it was deemed to be decreasing in size and posed no threat.[2]

After the accident, public confidence in nuclear energy drastically declined, especially in the United States. This resulted in the decline of construction in the U.S. during the 80's and 90's. Skewed communication on the effects of the accident caused confusion and worry among the population—as misunderstood reports stated radiation doses in the area being much larger than they actually were.[3]

Health effects were essentially negligible. Approximately 2 million people received about 10 microsieverts above the normal background radiation dose—6x less than a what a chest x-ray would expose someone to.[2] Many well respected organizations, such as Columbia University and the University of Pittsburgh, conducted experiments on the nearby area, and all came to the conclusion that health effects on humans and the environment were negligible.[2]

As mentioned before, this event caused the improvement in many areas of safety and operation. Power plants all over the world had to live up to a higher standard, and if all of the measures were taken by the operators of the Chernobyl nuclear reactor, the disaster could have had a far lesser impact.[5]