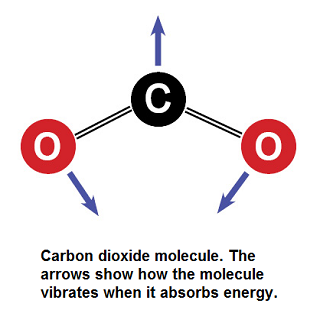 Figure 1. The CO2 molecule. Note that a carbon has a mass of 12, while the total is a mass of 44. This image shows its vibration modes for absorbing infrared radiation[1]

When discussing climate change, the basic element carbon is often mistaken for carbon dioxide and vise versa.[2] Carbon (often abbreviated with the chemical symbol C) is the sixth most abundant element on Earth. Carbon is essential to life as it is found in all living beings and at room temperature is a solid and can be also found in various other forms of such as graphite and diamond.[3] Carbon dioxide or CO2 is the chemical compound of two oxygen atoms and one carbon atom, at room temperature it is gaseous and is a vital gas for life in the atmosphere since it plays a major role in photosynthesis. However, the CO2 that humans release is the leading greenhouse gas (GHG) causing problematic climate change.[4]

When people discuss carbon flowing through the carbon cycle this difference creates some confusion. For example when discussing the carbon going into a carbon sink or the carbon dioxide coming out of combustion.[6] However the major confusion between C and CO2 is the misinterpretation of the carbon cycle, the carbon cycle shows how carbon is essentially recycled in many different forms throughout its lifetime while CO2 only appears in the carbon cycle as an emission.[7] CO2 being the most common GHG in terms of emission by human activity, is often portrayed as the only GHG affecting global warming however, there are many other GHG’s contributing to global warming than CO2. Taking this into account, carbon is often used as the term describing GHG’s when carbon is not present in every chemical form found in GHGs.[8]