Greenhouse effect on other planets 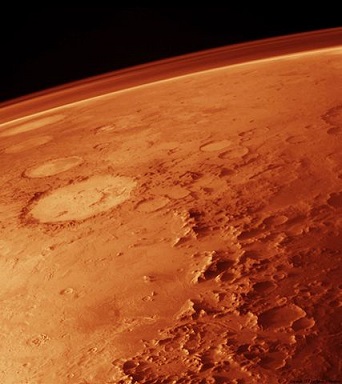 Earth, Mars, and Venus are different distances from the Sun. Venus is the closest and hottest, followed by Earth and then Mars. They are a fairly similar distance from the Sun, they formed out of the same material and had approximately the same initial temperatures several billion years ago.[2] Despite these similar initial conditions, Venus is now too hot for life and Mars is too cold. This difference in temperatures is caused partially by the different values for energy incident on these planets. The main difference is still caused by the composition and thickness of a planets atmosphere.

Temperature Difference and the Greenhouse Effect

Mars' climate is quite different from Earth's; Mars has a very thin atmosphere—with its atmospheric density being 1% of Earth's atmospheric density. [3] Additionally, the composition creates major differences. Mars' atmosphere is composed mainly of carbon dioxide, but there is so little carbon dioxide overall that the greenhouse effect is essentially negligible. This, coupled with the distance from the sun means that the temperature of Mars is significantly lower than the Earth's temperature.