Figure 1. Top of an RBMK reactor core in Ignalina, Lithuania. The plant was closed down in 2009.[1]

RBMK is a Soviet-designed nuclear reactor that uses enriched uranium as its fuel. It is a rather unusual design as it uses graphite as its moderator, and was designed for plutonium production—but was also used extensively for electrical generation. The combination of graphite as a moderator and light water as coolant is unique to this reactor as no other reactors in the world use both.[2]

The RBMK is famous as it was the ill-fated reactor involved in the Chernobyl disaster. As the disaster showed, the RBMK had some key design flaws. In particular, the location of the control rods, the containment structure, and the reactor's positive void coefficient proved to be quite unsafe. Since the disaster in 1986, the remaining RBMK reactors in use had some significant design changes to address these problems and ensure safety in future operations. RBMK reactors operated for decades in Russia after the Chernobyl disaster.[2]

As mentioned above, the reactor is quite unique compared to other reactor designs. These design characteristics will be highlighted in this section, showing its distinction from the other reactor types.

Slightly enriched uranium pellets are packed into a 3.65 meter long zircaloy tube, forming a fuel rod. 18 of these fuel rods are combined into a cylindrical carriage to form a fuel assembly. Two of these rods are loaded into the pressure tubes.[2] Refueling of the uranium can be done while the reactor is operating since the fuel channels are isolated and can be lifted out of the core safely.

With the fuel loaded in these strong metal tubes, these pressure tubes are arranged vertically inside the core of the reactor. Cool light water flows through it which absorbs heat from the fuel assembly. This allows the fuel to cool and causes the light water's temperature to be at 290oC.[2] At this temperature the water is in the form of steam and emerges from the top of the core.

This is one of the key distinctions from other reactors. Graphite—the same used in pencils, except purer—is loaded into the container of the core which is about the size of a small house.[4] Graphite works as the moderator, which means it slows down neutrons in order to sustain a continuous fission chain reaction.[2] A distinction from other reactors is that the moderator here is not cooled down by any coolant. Therefore, the graphite operators at a hot 700oC—in contrast, the CANDU reactor's moderator is cooled down to 70oC.[4]

The blocks are pierced by about 1660 holes where roughly 1600 pressure tubes fit through, with an even distribution of control rods throughout, as seen in Figure 1 (colored squares are control rods).[4]

The use of control rods in the Chernobyl disaster were a key point for the events that occurred. It was said that "not even the Premier of the Soviet Union is authorized to run with less than 30 rods!", however during the events of the disaster, only about 6 - 8 control rods were inside of the core.[4] 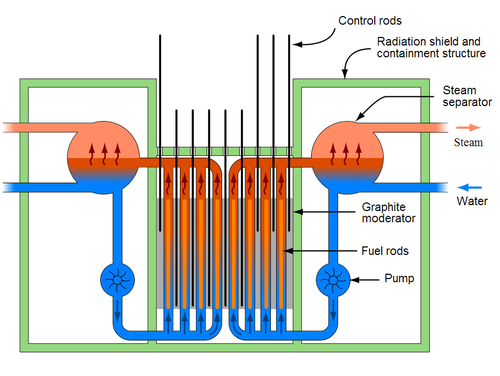 As mentioned prior, light water is used as the coolant and the working fluid. It acts to keep the fuel relatively cool, and to boil to steam and spin the plant's turbines. It operates in two loops as seen in Figure 3 to the right.

Each of the two loops has two steam drums (orange circle). This is where the steam from the heated coolant is fed to the turbine to produce electricity in the generator.[2] Each loop has a turbine that it feeds steam to. The steam is then condensed and fed back through as coolant.

Seen in Figure 3, the containment structure is not as sound as those seen in more modern nuclear power plants. This proved fatal in the Chernobyl accident as the pressure inside of the core blew off the top covering of the core, exposing the radioactive core to the outside world. The containment is made of concrete and metal, that act as a radiation shield.

The void coefficient in the RBMK is positive. What this means is that when there is an increase of steam in the core—aka a "void" of neutron-absorbing water—the reactivity of the reactor will increase. In contrast, a reactor with a negative void coefficient will decrease in reactivity, as seen in most Western reactors. This happens because the water acts as both the coolant and moderator so when there are voids present, there is a correspondingly less amount of moderator which balances or reduces the power output.

This positive coefficient was another key aspect of the RBMK in reactor unit 4 of the Chernobyl power plant. In the events of the accident, the excess production of steam (meaning an increase of voids) caused the void coefficient to become unsafely large. When the power began to increase, even more steam was produced, which in turn led to an increase in power.[2] This led the reactor to produce over 100x its rated power output, causing extreme temperatures and pressures inside the core, and causing failure.[4]

The Chernobyl disaster proved that the RBMK design had to be addressed. The key flaws were mentioned above, and the solutions to each of them are:[2]