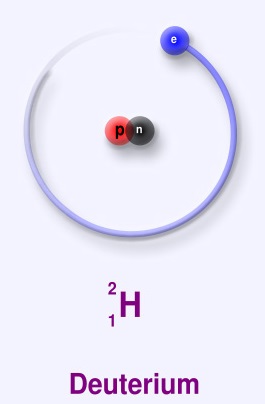 Deuterium is a stable isotope of hydrogen, consisting of 1 proton, 1 neutron and 1 electron. It is found fairly rarely in nature, making up a mere 0.015% of the total hydrogen abundance.[2]

In combination with oxygen, hydrogen at these natural abundances forms regular water (called light water). However when the deuterium content in water is increased, the resulting substance is known as heavy water, which acts as an effective neutron moderator in nuclear reactors. The CANDU reactor is one of these, with the "D" in CANDU standing for deuterium!

Knowing the amount of deuterium present at the Big Bang and the amount present today allows scientists to determine how much gas has been used to create stars.[3] Since deuterium quickly fuses to helium in stars, the deuterium on Earth is considered "pure", as it was formed shortly after the Big Bang. To learn more, visit Hyperphysics.

Deuterium's nucleus is called the "deuteron", consisting of a single proton and neutron bound together by the strong nuclear force. Free neutrons (not bound to any particles) naturally beta decay to a proton and electron yielding an energy of 0.78 MeV, however the binding energy of the deuteron is 2.2 MeV, preventing this decay.[2]

The stability of the deuteron is important for the formation of the elements in the universe after the Big Bang. If neutrons weren't able to be kept stable within a deuteron they would have all decayed away long ago. If this had happened, the formation of elements needed for life would have been impossible.[2]