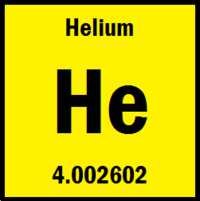 Helium is the 2nd element on the periodic table, and it is the 2nd most abundant element in the universe; making up 23% of the total mass of all elements (some sources go as high as 25%).[2][3] Helium was discovered in the Sun before it was found on Earth, when astronomers were analyzing a solar eclipse in 1868. Because of this, it was suitably named helium after the Greek god of the Sun, Helios.[4]

Some properties of helium include:[5]

Helium is found naturally on Earth due to the radioactive decay of elements trapped underground (often in natural gas mines in the United States). Some elements go through alpha decay in which they emit an alpha particle, which is merely a helium nucleus. When this nucleus captures two electrons, it becomes elemental helium.[4]

Elemental helium does not chemically bond with other elements because it is inert, meaning its valence shell is completely full. Therefore there are no known compounds of helium; even in the laboratory people have never been able to get helium chemically react with anything.

Helium and the Big Bang

The large abundances of helium found in the universe is evidence for the Big Bang theory. When the universe was dense and hot, protons and neutrons were able to exist in the same abundance (first section of Figure 2): this is because neutrons naturally beta decay into a proton and electron, however the high temperature allowed for the recombination of these into a neutron.[3]

When the universe expanded it cooled off, meaning that this recombination was no longer possible, and neutrons began to decay. However, due to the stability of the deuteron (a neutron bound to a proton), this decay was thwarted, and neutrons were able to exist much longer than in their free state. The deuterons were then able to fuse into helium at a later time, explaining the abundance observed today. Figure 2 below demonstrates this process (the 74% of hydrogen and 26% of helium are their relative mass abundance, not the abundance compared to all other elements).

Figure 2. "Big bang nucleosynthesis" explains the abundances of helium seen in the universe today. Refer to the text above for a more detailed explanation of this image.[3]

Helium is very useful in society, including specialized scientific experiments, medical procedures and even party balloons.

It is used for the inflation of balloons due to its low density. It is less dense than air, so it naturally rises due to buoyant forces, making it ideal for party or weather balloons.[6] This low mass means that the speed of sound is quite a bit faster, and that's why people sounds strange when they've inhaled helium.[7] Inhaling helium can be dangerous as it displaces oxygen, meaning that people can suffocate from breathing in helium, so be careful!

Due to its inert properties (helium doesn't chemically react with anything), it is used as a protective atmosphere for semiconductors and fibre optics. Helium's small diameter (smaller than any other chemically stable substance) makes it perfect to detect leaks in systems kept at very low pressure (sometimes as low as a billionth of an atmosphere).[6]