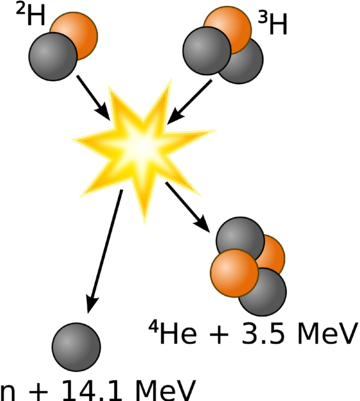 Nuclear fusion is a type of nuclear reaction where two light nuclei collide together to form a single, heavier nucleus. Fusion results in a release of energy because the mass of the new nucleus is less than the sum of the original masses. Based on the principle of mass-energy equivalence, this mass difference means that some mass that was "lost" has been converted into energy.[2] For elements lighter than iron, fusion often releases energy. For elements heavier than iron, it takes energy to cause fusion to happen. In order to make elements heavier than iron either a high energy particle beam is required, or a supernova.

Although the fusion of small atoms gives off a lot of energy, initiating this process requires a significant amount of energy. This energy is needed to overcome the Coulomb repulsion that exists between the protons the two different nuclei. Hydrogen atoms must be pushed close enough together so that the strong nuclear force can overcome the coulomb repulsion. The initial energy needed is a major factor which makes fusion difficult to achieve.[2]

Currently, there are no large-scale fusion reactor that could provide energy for commercial use. This is because it has been difficult for scientists to create a controllable, non-destructive way of harnessing the energy released during fusion.[3] The process of fusion is difficult to control largely because of the extreme conditions necessary for the reactions to take place.

First, fusion requires both extremely high temperatures to give hydrogen atoms enough energy to overcome repulsion between the protons. Energy from microwaves or lasers must be used to heat hydrogen atoms to the necessary temperatures. At these temperatures, hydrogen is a plasma, and this plasma must be sufficiently contained for fusion to continue, and safety.[3] Second, high pressures are needed to squeeze hydrogen atoms close enough to fuse. This process is done by using intense magnetic fields, lasers, or ion beams.[3]

For potential nuclear energy sources, the deuterium-tritium fusion reaction is most likely because the conditions are less extreme.[2]

Currently, the largest fusion effort is the International Thermonuclear Experimental Reactor or ITER in France. This reactor began construction in 2013 and uses a confinement method known as a Tokamak. This Tokamak provides a way to magnetically confine the hot plasma required for fusion. The experimental phase of ITER is expected to begin in 2027.[5] For more information on this project, click here.