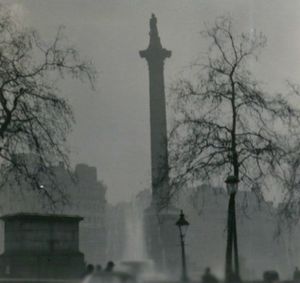 The Great Smog of 1952 was a massive pollution event in London, England, where the entire city experienced a heavy smog for over four days from December 5 to December 9, 1952. The smog was reported to be responsible for 4,000 deaths in following weeks, however recent research puts this number more realistically at 12,000.[2]

On the night of December 5, 1952, the smog from the daytime thickened to the point where pedestrians and vehicles could only see a few meters in front of them. In some areas, the smog was so thick that people couldn't even see their own feet.[3] In central London the visibility stayed below 500 meters for 114 continuous hours and below 50 meters continuously for 48 hours.[4] It remained this way until the 9th, when the weather changed allowing the smog to disperse into the atmosphere.

Although London got regular smogs during this time, the Great Smog was drastically worse than any other. There were many factors which caused the Great Smog to be so remarkable:[3]

Since the winds were light with the air near the ground being moist, conditions were perfect for the formation of radiation fog. Radiation fog forms when calm conditions with clear skies are present. When the land cools after sunset by thermal radiation, it produces condensation in the surrounding air by heat conduction. This causes a layer of fog to form less than a meter deep but as turbulence in the calm skies arise, it can promote thicker layers to produce.[4]

The fog formed as the night time temperature dropped, which formed a static layer of cooler air closer to the ground. This is referred to as temperature inversion. Typically, air closer to the ground is warmer than the air right above it which causes it to rise. However, inversions are common during winter nights once the ground has cooled during the night, which begins to cool the air closest to it often causing mist to form as water vapour precipitates onto dust particles. Normally in the morning, the sun quickly breaks through the mist and heats the ground, which breaks the inversion. However in December 1952 the accumulation of smoke which was close to the ground was so great that the sun could not break through, and the air stayed cool and static. Between the 4th and 8th of December 1952, the National Gallery in London suggests smoke measurements of particulate matter reached 14mg/m3 which was 56 times the level normally experienced at the time and the levels of sulfur dioxide in the air increased by 7 times reaching at around 700ppb.[4]

The amount of pollutants released each day during the Great Smog:[3]

As mentioned above, 12,000 deaths were attributed to the Great Smog.[2] Many more suffered from breathing problems due to the effects of the various pollutants on the human body.[3]

Public transit shutdown, as well as ambulance service. The underground rail system remained running, however became extremely congested. The London airport was also greatly affected, with hardly any flights making it into or out of London.[5]

Operas, concerts and sporting events were cancelled, as the smog seeped into most buildings. Crime also broke out, as many took advantage of the incapacitated population, breaking into shops and stealing from people on the street.[5]

The smog was so devastating that a series of laws and regulations were put in place to prevent any such event from occurring in the future. This includes the Clean Air Acts of 1956 and 1968, which banned emissions of black smoke and limited the types of fuels that could be used.[3]

These regulations made smogs such as the Great Smog a thing of the past in most parts of the world, and it serves as a lesson for the future of energy production.