A climate threshold is a critical limit where a climate system responds drastically when exposed to an external forcing, resulting in the system changing into a different stable state.[1] 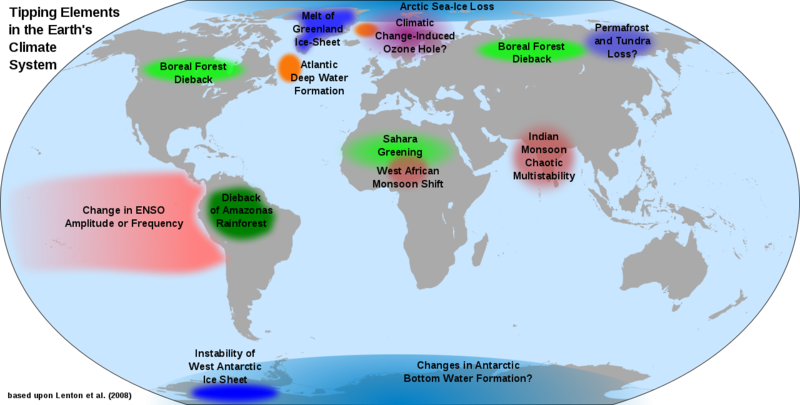 Figure 1. The climate system has a number of potential tipping points.[2] This includes the dying of northern (boreal) forests, tundra lost, and instability of various ice sheets, monsoons.

An analogy can be made to adding weight gradually onto a bar across a person's shoulders. At first, the person will be able to adapt to the added pressure on their body. As time passes and weight continues to be added, eventually the person won't be able to adapt any more and their body will give up, dropping the weight, leaving the person in a new steady state. Thus a climate threshold is also referred to as a "tipping point". In the analogy above, the "tipping point" will be the point at which the person can no longer hold the weight. In a climate scenario, the tipping point is when the changes become too much for the climate system to tolerate. Climate thresholds are an example of how the climate behaves in a non-linear way.

In both the weight-holding analogy above, and for the climate system, positive feedback plays a role in how quickly the system goes over the tipping point. In a positive feedback loop, any changes to the system will compound and move the system quickly out of a steady state. The person must continue to hold the old weight, while trying to adapt to the new weight. The fatigue of holding the initial weight, and the additional stress caused by any extra weight will tire the person out more and more with each addition. The climate system must maintain equilibrium while also trying to adapt to new changes and stresses. In both of these cases, the system tends to respond gradually to changes, until the system passes its threshold, after which abrupt changes occur.

Abrupt climate change is when the climate's response to a forcing is much larger than the actual change in that [climate forcing|forcing]].[3] Thresholds are important to study in order to test how well climate models can simulate their effects.

For example, a threshold exists with the increased amounts of freshwater flowing into the ocean from melting ice. This freshwater is a potential forcing for abrupt climate changes; both sea levels and ocean circulations could change drastically.[4]

To learn about how carbon is exchanged between these different pools visit:

To learn about effects that changes in these cycles bring about, see: