Figure 1. A solar panel, consisting of many monocrystalline cells.[1]

Photovoltaic cells or PV cells can be manufactured in many different ways and from a variety of different materials. Despite this difference, they all perform the same task of harvesting solar energy and converting it to useful electricity. The most common material for solar panel construction is silicon which has semiconducting properties.[2] Several of these solar cells are required to construct a solar panel and many panels make up a photovoltaic array.

There are three types of PV cell technologies that dominate the world market: monocrystalline silicon, polycrystalline silicon, and thin film. Higher efficiency PV technologies, including gallium arsenide and multi-junction cells, are less common due to their high cost, but are ideal for use in concentrated photovoltaic systems and space applications.[3] There is also an assortment of emerging PV cell technologies which include Perovskite cells, organic solar cells, dye-sensitized solar cells and quantum dots.

The first commercially available solar cells were made from monocrystalline silicon, which is an extremely pure form of silicon. To produce these, a seed crystal is pulled out of a mass of molten silicon creating a cylindrical ingot with a single, continuous, crystal lattice structure. This crystal is then mechanically sawn into thin wafers, polished and doped to create the required p-n junction. After an anti-reflective coating and the front and rear metal contacts are added, the cell is finally wired and packaged alongside many other cells into a full solar panel.[3] Monocrystalline silicon cells are highly efficient, but their manufacturing process is slow and labour intensive, making them more expensive than their polycrystalline or thin film counterparts. 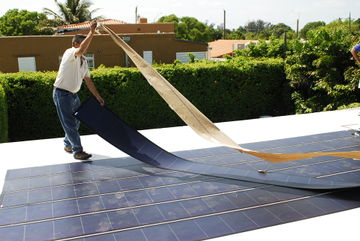 Although crystalline PV cells dominate the market, cells can also be made from thin films—making them much more flexible and durable. One type of thin film PV cell is amorphous silicon (a-Si) which is produced by depositing thin layers of silicon on to a glass substrate. The result is a very thin and flexible cell which uses less than 1% of the silicon needed for a crystalline cell.[3] Due to this reduction in raw material and a less energy intensive manufacturing process, amorphous silicon cells are much cheaper to produce. Their efficiency, however, is greatly reduced because the silicon atoms are much less ordered than in their crystalline forms leaving 'dangling bonds' that combine with other elements making them electrically inactive. These cells also suffer from a 20% drop in efficiency within the first few months of operation before stabilizing, and are therefore sold with power ratings based on their degraded output.[3]

Other cell technologies have been developed which operate at much higher efficiencies than those mentioned above, but their higher material and manufacturing costs currently prohibit wide spread commercial use. 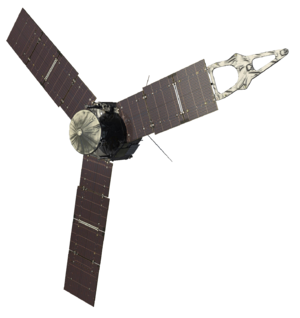 Due to its higher light absorption coefficient and wider band gap, GaAs cells are much more efficient than those made of silicon. Additionally, GaAs cells can operate at much higher temperatures without considerable performance degradation, making them suitable for concentrated photovoltaics. GaAs cells are produced by depositing layers of gallium and arsenic onto a base of single crystal GaAs, which defines the orientation of the new crystal growth. This process makes GaAs cells much more expensive than silicon cells, making them useful only when high efficiency is needed, such as space applications.[3]

The majority of PV cells, including those discussed above, contain only one p-n junction of semiconductor material which converts energy from one discreet portion of the solar spectrum into useful electricity. Multi-junction cells have 2 or more junctions layered on top of each other, allowing energy to be collected from multiple portions of the spectrum. Light that is not absorbed by the first layer will travel through and interact with subsequent layers. Multi-junction cells are produced in the same way as gallium arsenide cells—slowly depositing layers of material onto a single crystal base, making them very expensive to produce, and only commercially viable in concentrated PV systems and space applications.[3]

Electricity can be produced through the interaction of light on many other materials as well. Perovskite solar cells, named after their specific crystal structure, can be produced from organic compounds of lead and elements such as chlorine, bromine or iodine. They are relatively cheap to produce and can boast efficiencies close to those of commercially available silicon cells but they are currently limited by a short lifespan. Organic solar cells consist of layers of polymers and can be produced cheaply at high volumes. These cells can be produced as a semi-transparent film, but suffer from relatively low efficiencies. Dye-sensitized solar cells can be produced using semiconducting titanium dioxide and a layer of 'sensitizer' dye only one molecule thick. These cells boast modest efficiencies but cannot withstand bright sunlight without degrading. Quantum dots utilize nanotechnology to manipulate semiconducting materials at extremely small scales. 'Nanoparticles' consisting of a mere 10,000 atoms can be tuned to different parts of the solar spectrum according to their size, and combined to absorb a wide range of energy. Although theoretical efficiencies are extremely high, laboratory test efficiencies are still very low.[3]