Figure 1. Albedos of different surfaces.[1] An albedo of 1 would mean a perfect reflector and an albedo of 0 would absorb all light striking it.

Albedo is the amount of sunlight (solar radiation) reflected by a surface, and is usually expressed as a percentage or a decimal value, with 1 being a perfect reflector and 0 absorbing all incoming light. When talking about albedo, the surface is almost always the surface of a planet like Earth.[2] White objects, such as a snowy hill have a high albedo. Conversely, dark objects, like pavement, have a low albedo.[3] The term can also refer to human made structures. In fact, energy efficient building design takes albedo into consideration whether a wall or ceiling warms the building or keeps it cool - resulting in a choice of a dark or light coating respectively.

For a given area, albedo is determined by more than just the composition of soil, it's impacted by soil moisture, type of vegetation, and levels of urbanization. Different surfaces on the Earth have different albedos (shown in Figure 1) and that albedo varies with time. Changes in albedo occur as the amount of cloud cover changes. Likewise, changes in any surface cover, like snow, ice, and vegetation, shift the albedo. Albedo is one of the major properties that controls how much energy is absorbed by the surface of the Earth, the cloudiness and ground cover are important factors in climate models.

The Earth's surface doesn't have a single albedo, rather a number of different albedos that are combined into a single number to accurately describe how the Earth reflects and absorbs solar energy as a whole. Figures 2 and 3 below illustrate different albedos around the world, and how those albedos change depending on the time of year. For both images, high albedos are represented by the colour white while lower albedos are a dark blue. 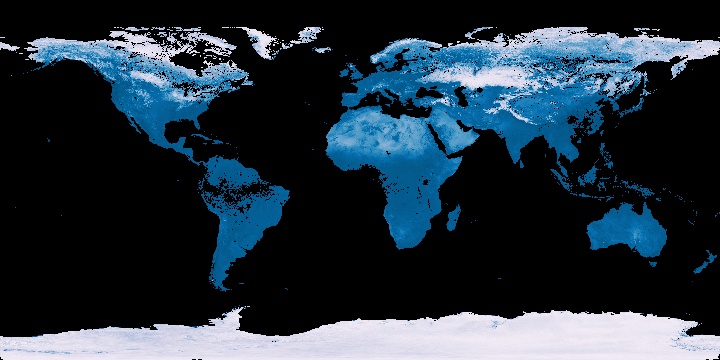 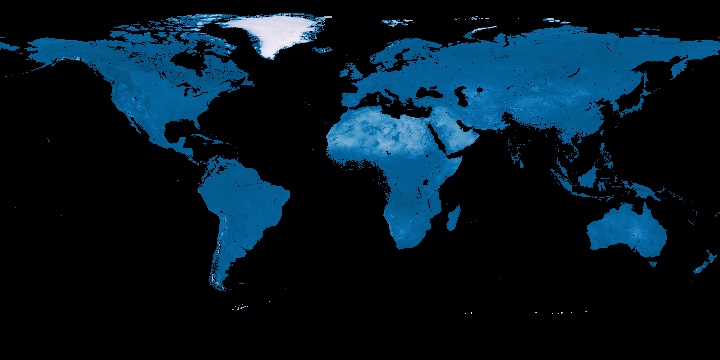 The Earth's climate depends on a balance of incoming and outgoing energy from the sun, which is determined by albedo. The overall albedo of the Earth - measured to be 0.30 - has a significant effect on the equilibrium temperature of the Earth as it changes how much solar energy is reflected by the Earth as opposed to how much is absorbed.[5] This changes how Earth's energy budget balances and thus changes Earth's heat balance.

As the world warms the Earth's albedo shifts. The amount of ice covering the planet is dropping as a result of increased temperatures from global warming. This causes a decrease in the area of white surfaces, leading to less energy to be reflected and more to be absorbed. This process warms the Earth even more. The melting of Arctic ice is especially concerning as it triggers a positive feedback (a feedback cycle that drives the climate out of control). In addition to melting ice, which lowers albedo, the conditions caused as a result of the greenhouse effect can also change the albedo of the Earth. The greenhouse effect can lower the albedo of the Earth by trapping in more infrared radiation with the increased number of greenhouse gases in the atmosphere, allowing less energy to bounce off of the atmosphere. Since the greenhouse effect can lower the albedo of the Earth and a changing albedo can result in a change in the equilibrium temperature of the Earth, a change in albedo can contribute to climate change.[6]