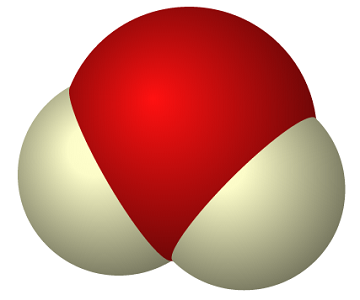 Heavy water is water that contains heavy hydrogen - also known as deuterium - in place of regular hydrogen. It can also be written as 2H2O or D2O. Deuterium is different than the hydrogen that usually occurs in water—known as protium, since each atom of deuterium contains a proton and a neutron, while more commonly occurring hydrogen contains only a proton.[2]

Heavy water does occur naturally, however in much smaller quantities than regular water. Approximately, one water molecule for every twenty million water molecules is heavy water. Since deuterium is a stable isotope, heavy water is not radioactive.[3]

In addition to being useful for nuclear reactors, heavy water has also been used in Canada to detect neutrinos from the sun at the Sudbury Neutrino Observatory, providing important insights to subatomic physics.

Use as a Moderator

In nuclear fission reactors, the neutrons must be slowed down to ensure an effective fission chain reaction occurs. This process of slowing neutrons down is known as moderation, and the material that slows down these neutrons is known as a neutron moderator. Heavy water is one of the two moderators that can be used which allow a nuclear reactor to operate using natural uranium. The other moderator is graphite.[4]

A heavy water reactor makes use of heavy water as its coolant and moderator. Deuterium works as a moderator as it absorbs fewer neutrons than hydrogen, which is extremely important as nuclear fission reactions require neutrons to carry out their chain reactions.[5] The heavy water is kept under pressure which increases its boiling point so that it can operate at high temperatures without boiling. CANDU reactors utilize heavy water as their moderator and thus do not require enriched uranium, rather uranium in its natural state can be used. 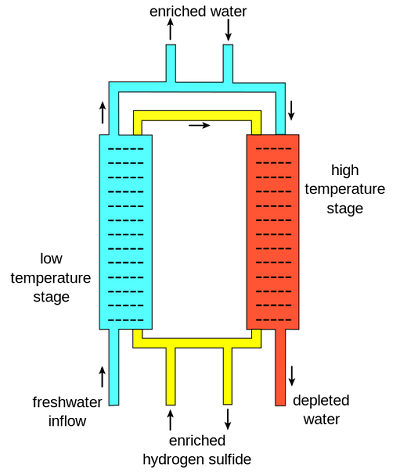 Figure 2. Sample setup of the Girdler sulfide process, showing the hot and cool columns along with where enriched and depleted water is drawn off.[6]

The cost of the heavy water is a significant part of the building cost of a heavy water reactor, but makes the reactors cheaper to operate (since uranium enrichment is unneeded). Technically speaking, deuterium is not "made" in a specific process, rather molecules of heavy water are separated from large quantities of water containing H2O or singly deuterated water in the Girdler sulfide process (which will be discussed in detail in the next two paragraphs). The water that is not heavy is discarded and is known as "depleted water". An alternative method exists when water is electrolyzed to make oxygen and hydrogen that contains normal gas, along with deuterium.[4] The hydrogen is then liquefied and distilled to separate the two components, then the deuterium is reacted with oxygen to form heavy water.

Producing heavy water requires advanced infrastructure, and heavy water is actively produced in Argentina, Canada, India, and Norway. The largest plant was the Bruce Plant in Canada, but has shut down. Technically, there is a slight difference in the boiling points of heavy water and water, so this difference could be taken advantage of when extracting heavy water.[4] However, since deuterium exists in such small numbers an enormous amount of water would need to be boiled to obtain significant amounts of deuterium. This would require a lot of fuel or electricity, so instead facilities exploit chemical differences between the two. The most important chemical method for producing heavy water is the Girdler sulfide process.

The Girdler sulfide process is a method that works based on an exchange of deuterium between H2S and regular light water. In this process, there are two separate columns. One column is at 30°C and is known as the "cold tower" while the other one is at 130 °C, known as the "hot tower". The separation occurs based on an equilibrium and the differences in equilibrium at the two different temperatures. The equilibrium equation is:[4]