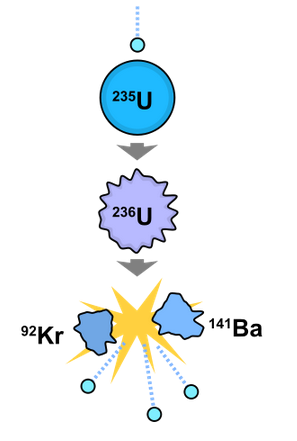 Nuclear fission is the process of splitting apart nuclei (usually large nuclei). When large nuclei, such as uranium-235, fissions, energy is released.[2] So much energy is released that there is a measurable decrease in mass, from the mass-energy equivalence. This means that some of the mass is converted to energy. The amount of mass lost in the fission process is equal to about 3.20×10−11 J of energy. This fission process generally occurs when a large nucleus that is relatively unstable (meaning that there is some level of imbalance in the nucleus between the Coulomb force and the strong nuclear force) is struck by a low energy thermal neutron. In addition to smaller nuclei being created when fission occurs, fission also releases neutrons.

Enrico Fermi originally split the uranium nuclei in 1934. He believed that certain elements could be produced by bombarding uranium with neutrons. Although he expected the new nuclei to have larger atomic numbers than the original uranium, he found that the formed nuclei were radioisotopes of lighter elements.[3] These results were correctly interpreted by Lise Meitner and Otto Frisch over Christmas vacation. To read this charming story about the history of nuclear science please see this article.

Where Does the Energy Come From?

The enormous energy that's released from this splitting comes from how hard the protons are repelling each other with the Coulomb force, barely held together by the strong force. Each proton is pushing every other proton with about 20 N of force, about the force of a hand resting on a person's lap. This is an incredibly huge force for such small particles. This huge force over a small distance leads to a fair amount of released energy which is large enough to cause a measurable reduction in mass. This means that the total mass of each of the fission fragments is less than the mass of the starting nucleus. This missing mass is known as the mass defect.[4]

Fission of heavier elements is an exothermic reaction. Fission can release up to 200 million eV compared to burning coal which only gives a few eV. From this number alone it is apparent why nuclear fission is used in electricity generation. Additionally, the amount of energy released is much more efficient per mass than that of coal.[3] The main reason that nuclear fission is used for electricity generation is because with proper moderation and the use of control rods, the ejected free neutrons from the fission reaction can then go on to react further with the fuel again. This then creates a sustained nuclear chain reaction, which releases fairly continuous amounts of energy. One downside to the use of fission as a method of generating electricity is the resulting daughter nuclei are radioactive. Below is a simulation showing how neutrons in a reactor result in fission events inside a fuel bundle. On the simulation, a red flash inside the fuel rod means a fission event occurred, while a blue flash indicates neutron absorption.

When nuclear fission is used to generate electricity, it is referred to as nuclear power. In this case, uranium-235 is used as the nuclear fuel and its fission is triggered by the absorption of a slow moving thermal neutron. Other isotopes that can be induced to fission like this are plutonium-239, uranium-233, and thorium-232.[2] For elements lighter than iron on the periodic table nuclear fusion instead of nuclear fission yields energy. However, currently there is not a method that allows us to access the power that fusion could produce.