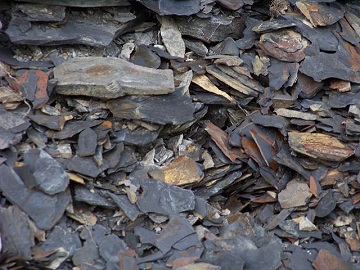 Shale is a fine-grained sedimentary rock that is formed when silt and clay are compressed. It is composed of many thin layers, and it readily splits into thin pieces where these layers meet—making it a relatively brittle stone.[2] Shale is composed of small grains and various minerals along with organic particles.

Black shales are the shales that contain organic matter and can break down to form natural gas or oil. They are all grey or black in colour.[2] Shale forms when layers of silt and mud collect and lithify (turn into rock). Specifically, lithified mud becomes stone and shale is thus known as "mudstone".[3] The Barnett Shale, Marcellus Shale, Haynesville Shale, and Fayetteville Shale are large deposits of shale with natural gas.

Black, organic shales are the source rock for oil and gas deposits, obtaining their colour from carbon particles. Oil and natural gas can migrate out of the shale, moving upwards where they are trapped within the pores of some other rock—such as sandstone. These deposits are known as conventional reservoirs since the fluid flows easily through the pores of the rock.[2]

Although drilling to extract oil and natural gas is possible, a large amount is still trapped inside the pore spaces of the shale. This oil and gas is difficult to remove, and it takes unconventional methods to access this oil and gas.

Pore spaces in shale are extremely tiny, and because of this gas cannot easily move out of the shale. However, some gas can be released through hydraulic fracturing, a method where water and chemicals are pumped down a well under pressure to fracture the shale. In addition, horizontal drilling was found to help with the release of natural gas trapped in shale.

Oil shale is rock that contains large amounts of kerogen. This type of shale forms when kerogen is buried at a depth of 2-4 kilometers and can yield both liquid and gaseous hydrocarbons if the rock is heated or treated with solvents.[3] Although this resource does provide a source of fossil fuels, the process of extracting these hydrocarbons produces emissions and waste products that cause significant environmental concerns. Because of this the extensive oil shale deposits around the world are not actively used.