Supercritical water cooled reactor (SCWR) is a proposed Generation IV nuclear reactor which would function above the thermodynamic critical point of water. The critical point of water occurs when its temperature reaches 374°C and its pressure is 22.1 MPa.[1] At this point, water becomes neither a liquid nor a gas, but rather a distinct state with its own unique properties. The SCWR is one of three light water nuclear reactors, with the others being the pressurized water reactor and boiling water reactor. These are the most used reactors in the world for nuclear power generation. The Canadian supercritical reactor (see below) uses heavy water instead of light water.

The design of the SCWR follows a combination of the basic principles of boiling water reactors and supercritical coal plants, both of which have been used extensively and would help to reduce experimental hurdles experienced with new projects.[1] The use of supercritical water would succeed in increasing the efficiency of the reactor to near 44%, compared to around 34% for current reactors—while potentially decreasing the capital cost by up to 30% due to smaller necessary containment and safety systems.[1] This increase in efficiency would decrease the waste heat produced by the reactor by 35%,[2] thereby making better use of the nuclear fuel in the reactor.

The main advantage of the SCWR would be improved economics because of the higher thermal efficiency and the potential for plant simplification. Research in the areas of safety, sustainability, and proliferation resistance and physical protection are being pursued by considering several design options using thermal and fast neutrons.[3] The use of thorium for fuel also has potential in a SCWR.[4]

See Figure 1 below for a schematic of a SCWR. 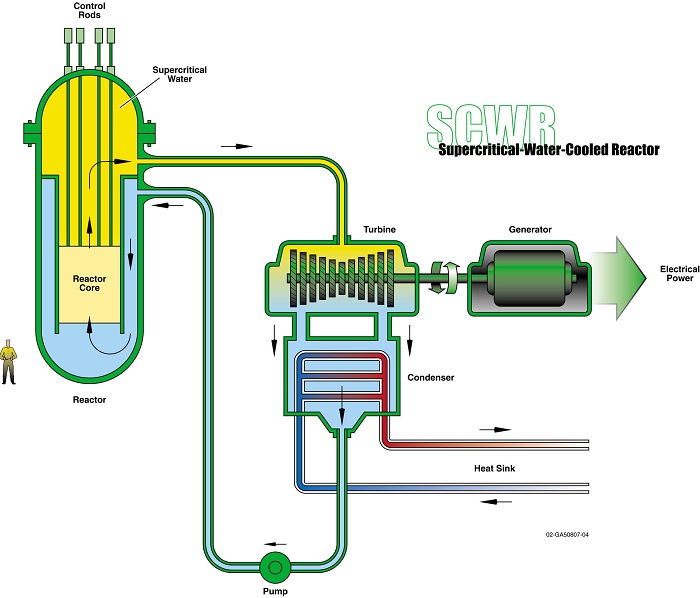 Figure 1. Schematic of SCWR, note the person in the picture gives an idea of how small this reactor is.[1]

Generally, the theoretical designs of SCWRs can be divided into two main categories: the pressure vessel concept proposed first by Japan (and more recently by The European Atomic Energy Community (Euratom) partnership), and pressure tube concept proposed by Canada (uncreatively called the Canadian-SCWR). 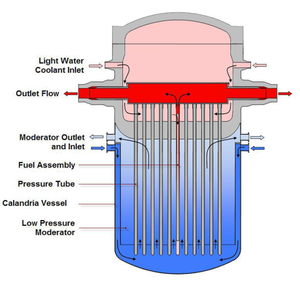 The JSCWR uses neutrons that become slowed down, using light water as moderator and reactor coolant to become moderated neutrons. The JSCWR consists of a pressure-vessel type once-through reactor and a direct Rankine cycle system (see figure 2). The coolant goes into the reactor through inlet nozzles, heated up in the core and flows through outlet nozzles with no recirculation in the vessel. The core outlet coolant is directly delivered to the turbine system, and the feed water comes back directly from the feed water pumps. The electrical output is assumed to range from 600 MWe to 1700 MWe.[6] 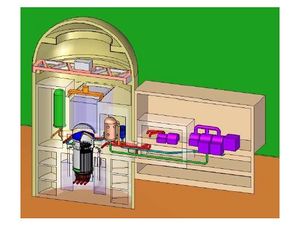 The model of the Canadian-SCWR also slows down the neutrons (moderated neutrons) and maintains the CANDU modular design with fuel channels separating the light water coolant from the heavy water moderator (see figure 3.). Operating conditions are set at a pressure of 25 MPa and the water comes out of the core 625°C. This high outlet temperature would lead to an estimated thermal efficiency of 48%.[3] The reheat option and co-generation capability can be achieved by advanced enhancement of the thermal efficiency. The supercritical steam is led directly to the high-pressure turbine, eliminating the need for steam generators which results in plant simplification and cost saving. Unlike the conventional CANDU design, Canadian SCWR has vertical pressure tubes to avoid thermal stratification. Unfortunately, this feature loses the ability to have on-line refueling. The electric power output is assumed to be about 1200 MWe.[3]

The Euratom SCWR has a more complicated way of heating up the coolant by adding several more changes. This is to keep the hottest part of the cladding (covering for the nuclear fuel) below 650°C. The once through steam cycle produces 1000 MWe, resulting in a net efficiency of 43.5%.[3]

While many of the aspects of SCWR are attractive, further research needs to be done on the chemical and physical properties of materials. These materials need to be able to exist in the radiation field of a nuclear reactor at the same time as the somewhat extreme chemistry of supercritical water. Both radiation fields and supercritical water can lead to materials degrading over time. Further research is needed to make sure that these materials won't chemically corrode in this extreme environment. Research on the physical properties of these materials is needed to be certain that they won't crack or simply bend out of shape due to the high mechanical stress.

Demonstration of passive safety systems must be completed and heat transfer models for the supercritical water also provide research hurdles which are necessary to surpass for future development of these systems.[1]