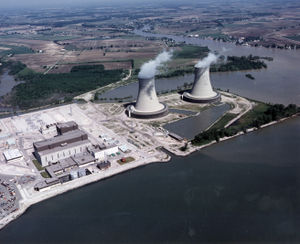 Figure 1. The Enrico Fermi Nuclear Generating Station in Newport, Michigan operates by use of a boiling water reactor.[1]

Boiling water reactors (BWR) are a type of nuclear reactor that use light water (ordinary water, as opposed to heavy water) as their coolant and neutron moderator. They are the second most used reactor for nuclear power generation in the world, next to the pressurized water reactor (PWR)—with 75 in operation as of 2018.[2] Figure 2 graphs the percentage of various types of reactors worldwide and the chart details the number of each.

With maximum operating temperatures of around 285oC, the Carnot efficiency (maximum efficiency) of boiling water reactors in the production of power is 46%.[3] However, the realistic efficiency of these reactors in power production is around 33-34%.[4]

See the section below to view a basic operating cycle of a boiling water power plant. 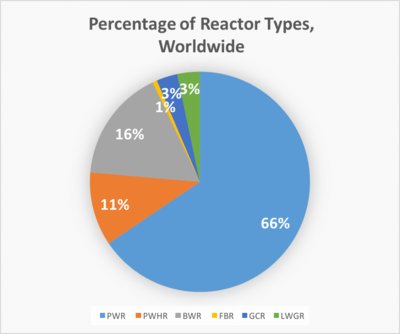 Boiling water reactors must use enriched uranium as their nuclear fuel, due to their use of light water. This is because light water absorbs too many neutrons to be used with natural uranium, so the fuel content of fissile Uranium-235 must be increased. This is done through uranium enrichment—which increases the concentration of Uranium-235 from 0.7% to around 4%.[4]

The enriched uranium is packed into fuel rods, which are assembled into a fuel bundle, as seen in Figure 3. There are about 90-100 rods in each bundle, with up to 750 bundles in a reactor.[5] This corresponds to nearly 140 tonnes of uranium!

As mentioned before, light water is used as the coolant and moderator for a boiling water reactor. Light water is much more abundant than heavy water, as it makes up 99.99% of natural water.[7]

The use of light water as a coolant is beneficial as it can cool down the fuel at the same time as it heats up to steam. The steam moves through the turbines which spin a generator to generate electricity. This simplifies the design of boiling water reactors, as there is only one primary loop (see Figure 4) needed which results in a lower cost of development.[4]

Light water does not make as good of a moderator as heavy water or graphite due to its relatively high absorption of neutrons. However, its use as a moderator makes for an interesting and important safety feature; if there is a "loss of coolant accident: (LOCA), the moderator will also decline, causing the nuclear chain reaction to stop. In addition, if the moderating water overheats and turns to steam inside the bottom reactor core, there will be less moderator and therefore the chain reaction will stop.

Since the BWR has only one primary loop, as mentioned earlier, the very water that flows through the reactor core is the same one used to spin the turbines. In contrast, pressurized water reactors do not convert the hot water in the core to steam, therefore, two loops are necessary. This is the main difference between BWRs and PWRs.[5]

Less water needs to flow through a BWR than through a PWR, however, there are complications because the water becomes radioactive in its circulation. This means that there must be extra shielding in the non-reactor parts of the power plant.[4]

Control rods are placed in the bottom of the reactor, rather than the top as in PWRs. This is because in a boiling water reactor there is more steam at the top (visible in Figure 4 below), and placement of control rods in the steam portion would have a lesser effect than their placement in the water portion of the reactor.[4] There is higher reactivity of the fuel in the water portion due to its moderation, so the control rods are needed to change the reactivity as deemed fit by the operators.

Seen below is the flow of water through a boiling water reactor power plant, and its production of electricity.

Figure 4. A boiling water nuclear reactor operates on a direct cycle, where the water from the core is also used as steam in the turbine section.[8]